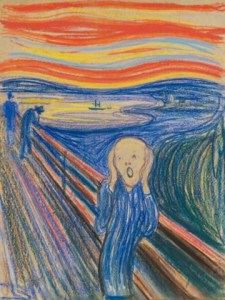 For six months, beginning on Oct. 24, the Museum of Modern Art will display Edvard Munch’s The Scream, the museum announced today. And while Munch created four versions of The Scream, between 1893 and 1910, this one, the 1895 pastel-on-board, is the only one in private hands.

While it was reported that Leon Black was the mystery buyer of the work when it sold at $120 million at Sotheby’s on May 2, breaking records as the highest work of art ever sold a auction, Carol Vogel of The New York Times reports that “nobody — including Mr. Black himself, officials at Sotheby’s or Mr. Lowry — would confirm that [Mr. Black] was the one lending the painting to MoMA.”

Glenn D. Lowry, the director of MoMA, said in a statement, “As an iconic image, The Scream has garnered worldwide attention for its stark portrayal of the human condition. For the Museum’s visitors, this will be a rare opportunity to see this extraordinary work of art.”

The work, which was part of Munch’s “Frieze of Life” series, will be presented with an array of prints by Munch from MoMA’s collection and will be presented in the museum’s galleries for painting and sculpture.