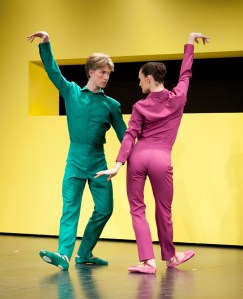 “He’s always used Jerome Robbins as a reference,” said art dealer David Kordansky to a small gathering of people gathered outside the entrance to the Kitchen in Chelsea last night. Mr. Kordansky was giving this impromptu sidewalk chat after the performance that occurred in conjunction with artist Elad Lassry’s solo exhibition “Untitled (Presence).” “His first film was based on Balanchine’s Agon.”

The performance last night, which involved 10 dancers from the New York City Ballet and the American Ballet Theater, was the third and last to be staged at the Kitchen with the exhibition. And while the show involved dancers doing dance-like gestures that sometimes felt familiar, it wasn’t exactly a dance. And not everyone knew what to expect.

“I’m a little mystified,” said a woman in a green top sitting next to us who came to the Kitchen expecting a dance performance and was not aware that this was the work of a visual artist. But she went upstairs and took in the exhibition of Mr. Lassry’s work before the dance. “I can’t say it did anything for me,” she said. During the performance, she nodded off almost immediately.

The exhibition, like most of Mr. Lassry’s exhibitions involved an array of photographs, sculpture and films, all of which challenge the boundaries of traditional genres. The photographs were in frames painted the same color as the dominant color in the image so as to render the photograph a sculptural object. There was a sculptural half-wall in the space with a wave-like ridge over which you could see a row of photographs hung on the wall and the loud shuttering of the 16mm film projector could be heard throughout the space. With the dance performance, the his second foray into choreography, Mr. Lassry was taking his exploration of framing and genre to the black box theater.

In the theater (this was the first time the Kitchen’s theater and second floor space had been used for one exhibition), the space was filled with three walls of varying heights in a variety of Mr. Lassry’s signature saturated hues, the last of which had two large oval apertures. The dancers—five women in blue jumpsuits and five men in mustard yellow jumpsuits—moved between and around the walls, sometimes dancing behind the apertures in the walls, framed by them, other times moving the walls physically around the space.

Mechanically, the dancers enacted a series of dance moves from a variety of dances—some seemed to be taken from Coppélia, while others felt like numbers lifted from A Chorus Line. From time to time the men would move the walls, some of which were on casters, around the space.

There was no music. The only sound in the space was the tap of the dancers’ feet as they pattered against the floor or the bright klieg lights, which turned rhythmically on and off, dramatically breaking the performance into episodes.

In one episode, two men stood in matching casual poses doing nothing more than rotating their limp hands. In another episode two women danced vigorously en pointe, tapping their feet in quick rapid steps, their faces in stiff half-smiles. As they glided down stage the lights turned off. When the piece was over the lights turned off. No one came out for a bow.

“I was surprised by how the dancers were used as props,” said a woman with blonde hair, an artist who was looking at the photographs of the dancers on the second floor after the performance and said she was familiar with Mr. Lassry’s work. “I like his photography work, but I’m less convinced by the performance.”

“The threshold of artifice, the surface,” said a man standing next to her, also an artist, “no longer resonates the same way.”

We asked another man walking through the space in yellow-tinted glasses if he considered the performance a dance. “No,” he proclaimed. “But I had the feeling of the ’50s. Maybe it was their outfits.”

By the white half-wall topped with the sculptural wave-like forms, we saw Tim Griffin, the curator of Mr. Lassry’s show.

“Everyone is bridling at convention,” he said, noting that the ambiguity of the performance, the confusion about what genre it fell into, was what made Mr. Lassry’s piece so rich. “To break it in this way is so exciting. If more dancers saw this, I think it would be a game changer.” 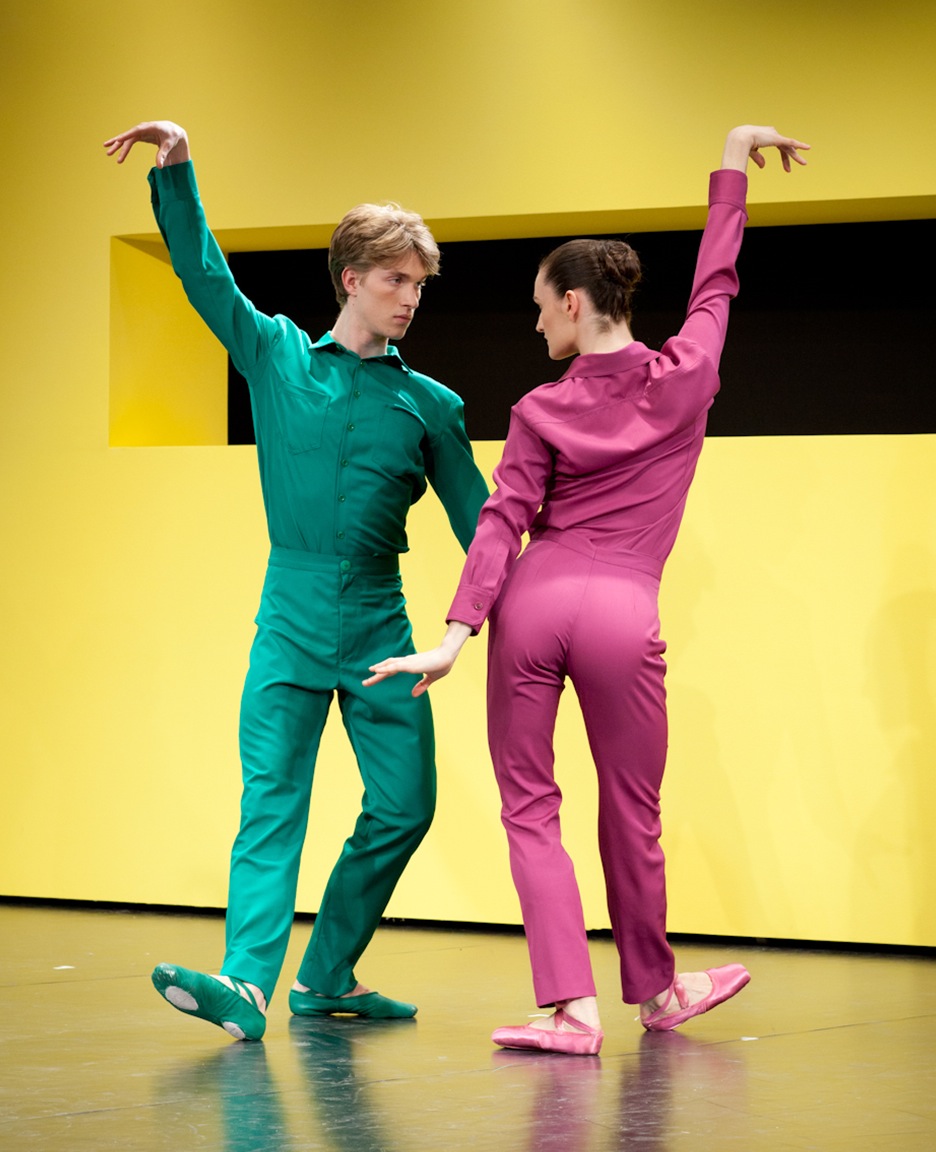