We know that the reason there are no skyscrapers in the middle of Manhattan has nothing to do with bedrock and everything to do with development patterns. And it is development that will alter that skyline once again. Trinity Real Estate recently unveiled their plans to rezone Hudson Square, the last undeveloped corner of Manhattan just west of Soho, north of Tribeca, south of the Village. As those neighborhoods would suggest, it is a place ripe for development. Just beware of over-development.

That is the message Trinity delivered when it went to the Community Board last week to present its plan as part of the city’s months-long public review process. Our buildings may seem big, but they could be bigger, as a presentation reported Curbed reveals (there will also be gourmet chocolate!). Trinity furnished The Observer with their key slide making this case, which shows towers pushing 500-600 feet in the neighborhood. Compare that to the roughly 200-foot skyline now, the Trump Soho not withstanding.

It is true, current zoning has no height limits, meaning clever developers could build even higher. At the same time, residential development is currently barred, so there would be limited reason to build bigger (a big office tower, or more likely, hotel is  possible regardless of the rezoning—see: Trump Soho).

All the same, even with a 320-foot height limit, these towers will top their hulking industrial neighbors. Another striking revelation from these renderings is just how many development sites there are in the district. As we previously reported, the city is looking at at least a dozen new buildings, but it’s always hard to conceive of just how many that is until you see a visual like this.

Not that there is anything wrong with this. In fact, it is quite exciting. Manhattan is a place of skyscrapers, and we will need more to house everyone moving here, especially given an affordable housing within the rezoning.

It kind of helps fill out the science fiction future where Manhattan is just one giant skyscraper district. 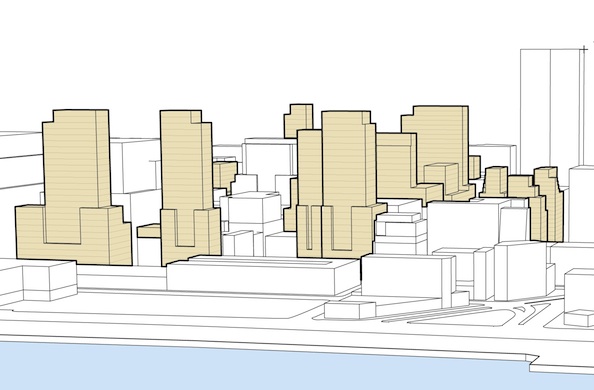