Democrats had reason to rejoice in the butt-kicking they administered to the GOP during legislative redistricting, but the GOP parlayed their embarrassment into a fierce congressional redistricting effort. It worked, as Republicans last year sold a map to redistricting tiebreaker John Farmer solving the state’s loss of population issue by offering up a Democratic Party human sacrifice. Their map pitted U.S. Rep. Bill Pascrell (D-8) against U.S. Rep. Steve Rothman (D-9) in a contest Pascrell ultimately won. Their map also ripped Cherry Hill out of the 3rd Congressional District and replaced it with Brick Township, bulking up the district with more Republican voters to protect incumbent Runyan and denying Democrats a key stronghold for victory in the 3rd.   The raw numbers: Brick has 11,520 registered Republicans compared to 9,315 Democrats; compared to Cherry Hill’s 18,411 registered Democrats to 7,685 Republicans. Designed as a 52% Republican performance district, on paper the 3rd has 120,038 Democrats, 113,203 Republicans and 209,191 Republican-leaning Independents. Chopped out of the district, Adler ran anyway, hoping to avenge her late husband’s 47-50% loss to the offensive lineman turned congressman.

Following Runyan’s 2010 win, the Democratic Congressional Campaign Committee (DCCC) set about trying to cast him as a dog soldier ideologue handcuffed to the extreme wing of his party. They repeatedly highlighted the record of a do-nothing, 13% approval rated Congress, according to Gallup, and even jeered at Runyan’s acceptance of a $174,000 annual salary. But in a district dominated by Fort Dix, Runyan in two years worked to get on the good side of veterans and labor, support he ran without against John Adler. The Republican congressman’s allies offer as proof of his moderate views Runyan’s ability to win backing from the operating engineers and teamsters’ unions this year in addition to the Chamber of Commerce. In 2008, Adler beat Chris Myers of Medford, 52-48% in a national wave election, riding Obama love into the first Democratic Party victory in the 3rd District since reconstruction. Deprived of those circumstances this time, the Adler Campaign hopes to glob onto Mitt Romney running mate Paul Ryan’s privatization designs for Medicare to galvanize seniors for a Democrat.

“The district is a district that improved drastically from the previous district, and Jon’s done a great job working with veterans and taxpayers,” said Burlington County GOP Chairman Bill Layton.

But there’s no overconfidence.

The GOP knows it’s not a joke election. After reintroducing Runyan to voters in a positive TV ad that ran for five weeks, they attacked Adler last week on taxes, pointing to her record on the local governing body in Cherry Hill.

A strong fundraiser like her husband before her, Adler faces the last 40 days of the campaign with an impressive schedule that includes headline events from former Pennsylvania Governor Ed Rendell, Newark Mayor Cory Booker and former U.S. Rep. Patrick Kennedy.

She’s already hit Runyan twice in television ads, linking him to a GOP agenda she argues is anathema to the working middle class. Absent the kind of ground game conditions her husband helped build, Adler will continue to rely heavily on television in this campaign.

While Republicans aren’t as strong as they would like to be in a town like Medford, for example, a 2-1 GOP base where residents drummed Myers out of office following the former congressional candidate’s alleged involvement in an online gay sex scandal, the Burlington Democratic Party has two solid winners in LD 7 (Assemblymen Herb Conaway and Assemblyman Troy Singleton), but otherwise lacks power.

In 2008, the Democratic Party won two freeholder seats; now they aren’t threatening. There’s no local danger zone for the GOP.

Both the Runyan and Adler campaigns told PolitickerNJ.com the candidates are scheduled to participate in a total of five debates, where the challenger hopes to make an intellectual indentation that will stick in voters’ minds on Election Day.

Patrick Murray, pollster and political scientist with Monmouth University, said the race is the most competitive congressional contest of this cycle in New Jersey – with a caveat.

“Yes, relatively speaking,” said Murray. “But it’s not anywhere near the tight race of two years ago.”

From a political insider standpoint, the race includes the fascination of two star strategists from opposing sides – Republican Chris Russell for Runyan and Democrat Mike Muller for Adler – matching wits.

Democrats mumble about how impressive Adler is, while wringing their hands about the nerve of the Republicans to redistrict her out of a proper showdown with Runyan. But if she runs well here, her Cherry Hill credentials may be transferable. If embattled veteran U.S. Rep. Rob Andrews (D-1) suffers a mortal political wound as a consequence of ongoing congressional ethics committee questions into his alleged misuse of campaign funds, Adler could find herself serving alongside Runyan in the future as a 1st Congressional District representative.  As for Runyan, he said he would serve eight years and then retire from Congress.

Lacking the surge of Democratic Party enthusiasm John Adler enjoyed at all levels in 2008, Adler will lose to Runyan. 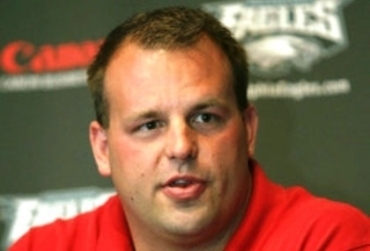