The Federal Trade Commission is looking to change regulatory lawsthat that protect children’s privacy on the Internet. Although it’s legal right now, a slew of apps and popular websites collect data and pictures from young users. In the most cringe-worthy example, pictures of children that were uploaded to a “get in the picture with Ronald McDonald” game in were kept by McDonald’s in directories that were publicly available to anyone who wanted access to them. McDonald’s tells the Times that they’ve now “blocked public access to several directories on the site.”

The new laws say children’s websites would be required to obtain parents’ permission before tracking kids around the Web for advertising purposes.

But while government restrictions may help protect innocent children, it’s hard not to feel that the responsibility (and the biggest hope for keeping kids safe) lies with their parents. After all, children don’t only stick to apps directed to their demographic.

Instructing them in the basic–don’t give out your birthday, don’t put up any pictures of yourself, don’t talk to strangers, and don’t do anything you wouldn’t do if we weren’t here–would go a long way.

The same rule for parenting should apply here. In today’s article about the FTC’s plan, the Times quotes a mother of two, who said:

“We are teaching our kids to ask, ‘What is the company getting from you and what are they going to do with that information?”

She’s on the right track.

Unfortunately, when mom’s only password is “password” and dad keeps giving away his social security number to Nigerian princes, kids might have to teach themselves–or learn the hard way. 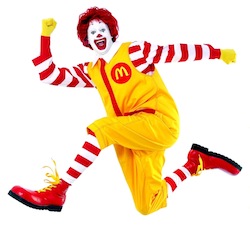