Tim Cook at a factory in Zhengzhou (cnn.com via Apple)

Foxconn decided to close down one of its factories in central China this morning after a riot took place in the factory compound late Sunday night, according to the New York Times. The plant in the city of Taiyuan employs about 79,000 workers and the brawl involved 2,000 of those employees. Reuters spoke to a Taiyuan plant worker who said that the factory is one of the plants assembles and makes parts for Apple’s iPhone 5.

No workers died in the riots, but three were put in critical care.

Pictures of the incident were shared on a Chinese Twitter clone and show that windows in the plant were smashed and that Chinese riot police were called to the scene.

This riot comes three months after a 23-year-old employee committed suicide a month after he started working at the plant. Back in March of this year, Apple promised to improve conditions at Foxconn factories. The announcement came after the Fair Labor Association found a slew of violations at Foxconn factories including ones related to working hours, compensation and health and safety.

Both the Times and Reuters emphasize that this event represents a shift in the attitude of Chinese workers, highlighting the frustration Foxcon employees feel with factory conditions. Both quote Geoff Crothall, a spokesman for a Chinese labor group, who says, “They’re more willing to stand up for their rights, to stand up to injustice” and “Clearly there is deep-seated frustration and anger among the employees and no outlet, apart from violence, for that frustration to be released.” 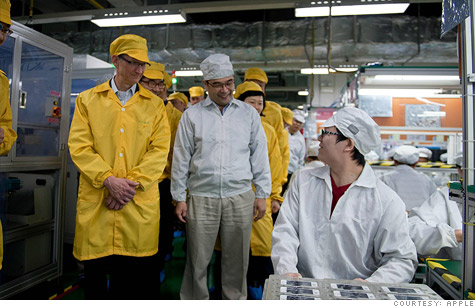