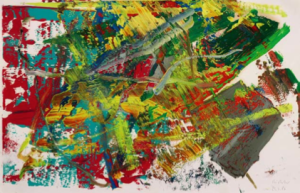 An untitled 1986 work by Gerhard Richter—an oil-on-paper work measuring about two feet by three feet—led the first Sotheby’s contemporary art sale of the fall season, bringing in $842,500, more than double its high estimate of $350,000. The sale, which took place on Friday, Sept. 21, in New York, brought in about $12.3 million, which was comfortably within its pre-sale estimate of $9.7 to 13.8 million, with 71.1 percent of lots selling.

Other highlights in the auction included Frank Stella’s 1969 work Window Sketch, which sold for $578,500 and Mark Grotjahn’s Untitled (Blue Butterfly), a 2001 painting in blue, black and purple that went for $554,500. Both works surpassed their high estimates.

“We are thrilled with the results of Friday’s sale with almost 90 percent of lots selling at or above their pre-sale estimate and with an amazing performance by abstract expressionists,” said Erica Barrish, vice president of Sotheby’s Fine Arts Department, in a statement. “There was great international participation and very active bidding throughout the day. With this sale of Untitled by Richter, Sotheby’s currently holds the top five sales of his works on paper globally, and this work was the second highest result for Richter on paper to date.”