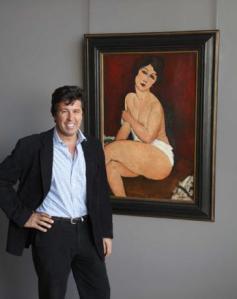 Big news in Carol Vogel’s column in The New York Times today. The former superdealing firm Giraud, Pissarro, Ségalot, whose future was unclear following the departure of Franck Giraud late last year, has re-formed, as it were, as Connery, Pissarro, Seydoux.

The Connery is Stephane C. Connery, former worldwide director of private sales for Sotheby’s, who left in May, and Seydoux is, of course, Thomas Seydoux, a former dealmaker in Christie’s Impressionist and Modern private sales divison, who left Christie’s the same month.

As Ms. Vogel notes, it’s a bit like the Hatfields and the McCoys coming together. Read more here.