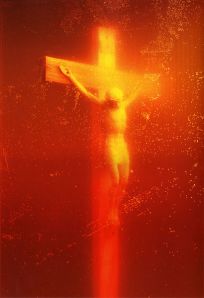 Today the New York Post decided it would try to channel a 1980s-style culture war by noting that Edward Tyler Nahem‘s upcoming Andres Serrano retrospective will include his iconic Piss Christ (1987) photograph, which shows a crucifix sitting in urine. The 25-year survey is curated by artist and former Artnet editor Walter Robinson.

Naturally, a Republican congressman, Representative Michael Grimm of New York’s 13th congressional district, answered the Post‘s call. He said in a statement that he thinks the work is “vulgar and offensive”—wait for it—”just as many in the Islamic world found ‘Innocence of Muslims’ [that anti-Islam film] to be highly offensive.”

Later in the message he lambastes the Obama Administration for not condemning the display of the image.

Some interesting facts: Congressman Grimm was elected in 2010 as part of the Tea Party wave. He’s in a swing district. And he’s reportedly under investigation by the Federal Bureau of Investigation.

Thanks to The New York Observer‘s Politicker team for the tip. They have the full statement over at their website.