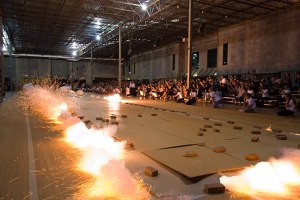 New York-based artist Cai Guo-Qiang, known for his gunpowder drawings and explosion events, is one of five recipients, along with composer Philip Glass, who have received the Praemium Imperiale, a global arts prize worth $192,600, awarded each year by the Japan Art Association, according to Bloomberg.

Since it was initiated in 1989, the Japanese prize has awarded five recipients, in painting, sculpture, architecture, music and theater/film, each year. Last year’s recipients included Bill Viola and Anish Kapoor.

Cai, best known for making art with gunpowder, became the prize’s first Chinese winner. His “Footprints in the Sky” piece for the Beijing Olympics opening ceremony was cited.

If you missed Mr. Cai’s works with gunpowder, which were on view in “Cai Guo-Qiang: Sky Ladder,” his solo exhibition at the Geffen Contemporary at MOCA from April 8–July 30, you can check them out on MOCA Los Angeles’s YouTube channel. As for Philip Glass, beginning this Friday, BAM presents a revival of the seminal 1976 opera Einstein on the Beach, which he scored and Robert Wilson directed.