Based on the minimal information in the YouTube description of this unintentionally comic viral video, it appears film producer and screenwriter Ron Senkowski was “walking between film financing meetings” in New York City on Thursday when he captured this instance of mutual thuggery between a pair of Wall Street types waiting for a cab.

In the video we see two nicely-dressed men of indeterminate age slapping, shoving, then grappling until one finally wins and slams that yellow door. The camera then swings rather sadly away, as if Mr. Senkowski was shaking his head sadly at the state of humanity.

We look forward to the ensuing slow-motion versions of this masterpiece set to “New York, New York” in the near future. 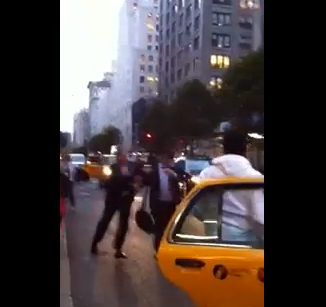