For decades, the barriers that have separated the people of New York and Hart Island have been nearly as insuperable as the boundaries between the living and the dead.

Visiting the city’s potter’s field—one of the few in the country that is still in active use—has been almost entirely forbidden, with family members of the approximately 850,000 people buried there granted highly-restricted, and some say grudging access, to a small, fenced-off area by the island’s ferry dock. The city purchased the 101-acre island off the coast of City Island in the Bronx in 1868 and designated it “a public burial place for the poor and strangers.” Although the island once housed a reformatory, a workhouse, a convalescent hospital and a prisoner of war camp, the Department of Corrections, the island’s caretaker, has always cited security concerns in defense of its strict closed-off policies. Prisoners from Rikers perform the burials.

Though the island would still be far from inviting. The first bill would mandate that the Department of Correction make a database of burials available on its website, allowing the public to determine whether a friend or relative’s remains are on the island. The second would make a small move towards expanding access for those who wish, for personal or possibly even research reasons, to visit the largest publicly-funded cemetery in the world.

The Council is not yet ready, however, to take up Intro 848, a bill that would make the biggest difference of all in expanding access: placing the island under the jurisdiction of the Parks Department. Melinda Hunt, the director of the Hart Island Project, a non-profit that advocates on behalf of families with relatives buried on Hart Island, is strongly urging the city to make the change. Through a series of freedom of information requests and lawsuits, Ms. Hunt’s Project has been instrumental in securing public access to the island’s burial records (since posts to the project’s website) and, slowly, to the island itself. Ms. Hunt’s organization argues that the DOC is an intractable and inappropriate manager of a burial ground.

At a Thursday council hearing about the bills, family members of the Hart Island dead described the difficulties of accessing DOC records and visiting the Island. Visits have, in the past, only been granted to those who can produce a death certificate confirming burial at the “City Cemetery” and prove a relationship to the deceased. In 2005 the homeless advocacy group Picture the Homeless and several church groups also secured visitation rights for interfaith memorial services, at which point the DOC constructed the gazebo by the . However, those with family members buried on Hart Island say that such improvements do not go far enough. They point, in particular, to the prohibition against visiting the actual burial area, or any place beyond the ferry terminus ( a prohibition that Ms. Hunt said has only been in place since the construction of the gazebo in 2005). However, opening up a larger area of the island or introducing graveside visits are not included in either of the two bills before the council and the DOC claims that it cannot accommodate such changes.

“I had no opportunity to bury my child. Now, having finally located her place of burial, I cannot visit her grave because the Department of Correction is free to invent ‘closure visits’ to Hart Island and define ‘spiritual solace,'” said Laurie Grant, an OBGYN whose stillborn daughter was buried on the island without her knowledge in 1994. “Does a gazebo with prison guards constitute appropriate access to Hart Island?”

Ms. Grant is one of the many mothers who said that they did not understand that paperwork they completed in the hospital meant that the children would be buried on an inaccessible island. Indeed, infant burials account for a large percentage of burials on the island (the others being indigent and unclaimed adults). Peggy Regensburg, who runs the city’s Sudden Infant Death program at the Medical Examiner’s office, said that she first learned of Hart Island after receiving calls from numerous bereaved parents who were trying to locate their children’s remains and were not aware they had authorized burials at a potter’s field.

“It’s unconscionable. People sign papers when they’re still fogged up with medication in the hospital and they don’t realize that their child is not in the city morgue or the hospital or the funeral parlor,” said Ms. Regensburg, adding that most parents she spoke with had the means and the desire to handle the burials themselves. She noted that the fact that Hart Island was administered by the DOC meant that many foreign-born and non-English speaking parents were reluctant to contact prison authorities about visitations or possible disinterrments (disinterrments are occasionally done, in situations where family members request them and it is possible to locate remains in the shared burial trenches).

“The entire journey from beginning to end was like being in a bad novel,” said Elaine Joseph, who visited the island in March to mourn the 5-day-old daughter who died in 1978 at Mt. Sinai Hospital. “I got off the boat and was escorted about 75 yards to an old run down gazebo. This was as far as I was able to go. From there all I could see was a dilapidated, run down island that looked like a ghost town…. what an awful place to spend eternity.”

Mark Taylor, the attorney who represents the Hart Island Project said that although it was unreasonable to expect the DOC to manage the cemetery well, given that “this is not what they do,” the cemetery was “very poorly managed.”

“The idea of having one of the largest cemeteries in the country where you can’t visit, it’s crazy,” he said.

For its part, the Department of Corrections points to the massive work of managing the cemetery and claims that it has been making a concerted effort improve public access. The DOC also supports bill 803, which would require it to make its electronic database of those buried on the island since 1977 available on its website, but pointed the tedious and slow process of creating the database (the Hart Island project has requested that the DOC license its database, which would provide immediate access on the DOC website). The department has also agreed to comply with bill 804, which, if passed, would require the DOC to post its visitation policy on its website and make the written policy available to anyone requesting a copy.

Warden Gregory McLaughlin said that as of last year, the department revised its visitation policy to allow non-family members to visit and was even willing to allow researchers to visit “if space was available.” (Researchers and journalists have long been completely banned from the island.) As for visiting actual grave sites, Mr. McLaughlin said that “greater access to the island is difficult at this time,” because of security concerns, as well as the lack of public transportation to the Island (the DOT operates a limited access ferry) and facilities with running on the island. He said that building such facilities would cost “millions and millions.”

There was a strong feeling that they were but small improvements. In fact, Ms. Hunt’s Hart Island Project opposes the passage of 804 because it establishes that the DOC is in charge of visitation, something that Ms. Hunt believes is a step in the wrong direction.

“It’s just shameful that you’ve been treated that way,” said council member Vincent Gentile, addressing the two women whose infants had been buried on the island. “The city of NY owes you an apology.”

As for the more ambitious bill 848 that would end the DOC’s management of the Island altogether, the hearing Committee was less encouraging. Ms. Crowley, who also sponsored 848, cited costs and questions about the Parks Department’s suitability for managing the Island.

“It’s something we’re working on and we’re not ready just yet,” she said.

Correction: An earlier version of this story incorrectly stated that there was no opposition to either of the bills. In fact, the Hart Island Project opposes Intro 804 because it feels it will codify the DOC’s oversight of visitation. 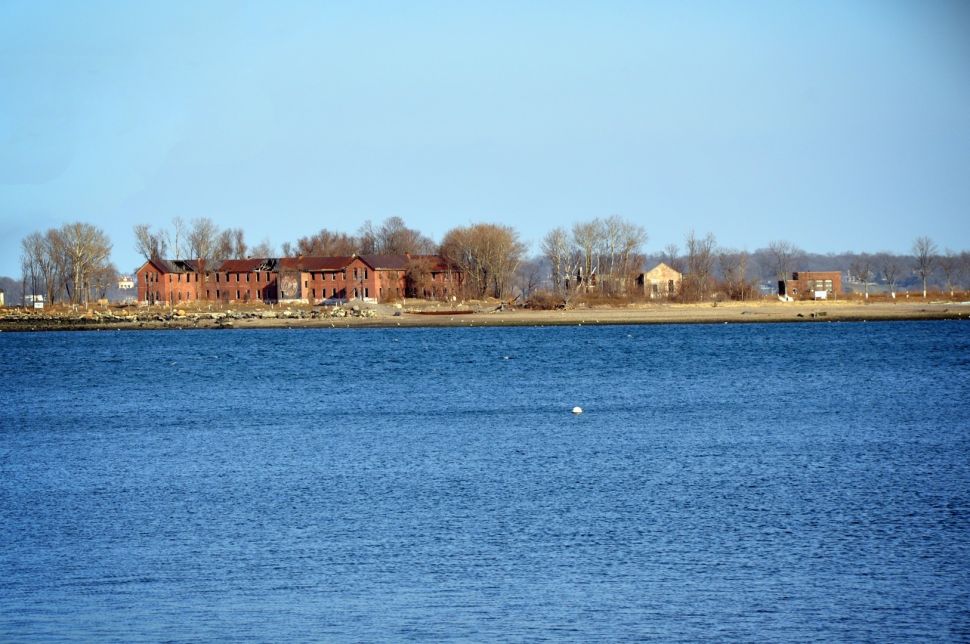