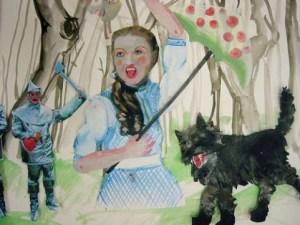 Martha Colburn. Still from ‘meet me in Wichita.’ (Courtesy the artist)

When it was announced in August that Horton Gallery was moving from its Chelsea location to a 2100 square foot space in the L.E.S., gallery owner Sean Horton also said that he would be adding six to eight new artists to the gallery roster. Mr. Horton is making good on that promise having just announced that the gallery now represents filmmaker, animator and multimedia artist Martha Colburn. “Camera, lights, charge, Pop!,” Ms. Colburn’s first solo show at the gallery opens at the new location on Sept. 28.

The exhibition will showcase one and a half hours of films, from the mid-1990s to the present, comprised of manipulated found footage and stop animation in addition to her Polaroids and large-scale collages.

Ms. Colburn, who divides her time between New York and the Netherlands, is also a musician (she’s released six records with Jason Willet as The Dramatics), did animation for the film The Devil and Daniel Johnston, and has most recently made music videos for Deerhoof and They Might Be Giants.

To get a sense of her aesthetic, check out this darling anti-fracking film she did as a commission from WBAI Radio.