The Fire Department’s promotional exams may be the most challenging civil service tests in the city. The guys who take them certainly think so. “The fire exam is definitely the toughest there is, ten times harder than cops or anything else,” Captain Joe Loftus told The Observer recently.

In the past few years, a cottage industry has sprung up to help firefighters study for the exams that allow them to rise through the ranks. Capt. Loftus and a group of his colleagues were at the forefront three years ago when they launched LtQuestions.com, a simple WordPress site that offers fellow firefighters sample tests—16 for only $96.

Unfortunately, LtQuestions.com and similar sites meant to help firefighters better serve the city also appear to be imperiling it at the same time.

Convenience is key in our frenetic modern lives, and the same goes for New York’s Bravest. These sites were created to help firefighters study for the various departmental exams that can make or break a career in the department. Along with an officer’s guide and testimonials, the site provides free downloads of the hundreds of books and other relevant study materials.

Since LtQuestions.com appeared, imitators, each with a different study system, have sprung up, as well. All feature a trove of FDNY documents, some 3,000 pages in total, long available at firehouses around the city. Stacked up, the books reach past a stout fireman’s bellybutton—worse than any grad student’s workload.

While these sites are condoned by the Fire Department as useful study aides, all of them publish a number of sensitive documents that would be invaluable not only to would-be brass but also to anyone with the desire to do the city or its residents harm, from a terrorist cell to a disgruntled citizen. Among the documents the site makes available to anyone with an Internet connection are detailed plans and schematics for highly sensitive parts of the city’s infrastructure, the subway system, the airports, the electrical grid, and the sewer and gas systems, to name a few. There is an irony, perhaps, in the fact that such detailed intelligence enables an attacker to strike not only at innocent civilians but also the first responders rushing in to save them.

The Fire Department insists the materials are harmless, and that much of it has been available in various forms for decades. “I’ve asked around, and nobody seems to think there is anything very serious in there,” said FDNY spokesman Frank Gribbons.

But a number of current and former fire, counter-terrorism and city sources with whom The Observer shared the documents expressed concerns that in the wrong hands, they could pose a threat to the city’s infrastructure.

“How much of a threat is it?” asked Professor Joseph King, a counter-terrorism expert at John Jay College. “I think if someone wanted to blow up a subway tunnel, know exactly the longest route, the worst spot, they could find this and use it. Would it give them access to the tunnel? Would it show them the secondary route so they could get everyone who goes in after them, and blow them up, too? I think it could.”

As the information age continues to jostle with the post-9/11 mindset, as frivolous cartoons and videos lead to riots around the world, as planes are grounded and shoes removed because of nonexistent bomb scares, just how cautious should the city be? What is the right balance between access and anxiety? 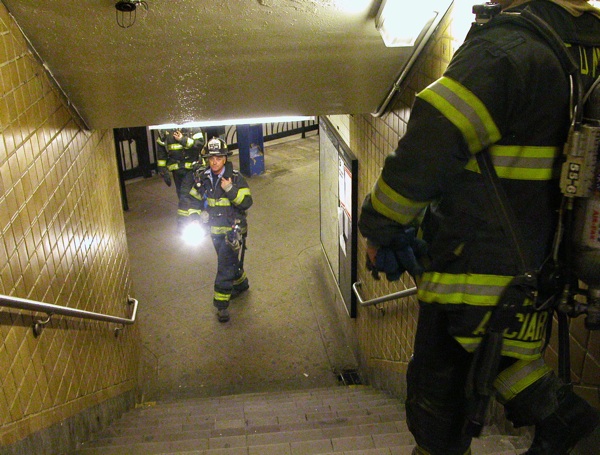