Having helped dethrone one incumbent Democratic mayor who endorsed Gov. Chris Christie’s 2% cap, the Communications Workers of America (CWA) Local 1039 want to mount another mayor on their wall.

Today they plan to formally endorse Frank Salado, a challenger to Perth Amboy Mayor Wilda Diaz in the November election.

In May, the CWA contributed to the toppling of Orange incumbent Mayor Eldridge Hawkins, aggressively arguing for his ouster in a television ad campaign on the strength of his support for Christie’s 2% cap. Part of the Salado strategy against Diaz in this 7-1 Democratic Party registration city is to depict her as a Christiecrat and puzzle piece in the GOP governor’s 2013 re-election scheme.

A CWA source not in the local descibed the 1039 endorsement – if it ends up coming at all – as essentially meaningless.

For her part, Diaz said she’s a proud, lifelong Democrat – and a pragmatist.

“I’m the mayor who had to deal with a $250 million debt, which we paid down by $54 million,” said the mayor, who in 2008 defeated incumbent Mayor Joe Vas, later jailed for corruption. “I’m the mayor who has to prepare a budget for a city of 50,000 people who has to depend on funding from the state, regardless of who the governor is.”

Several well-heeled local political sources say it will be harder for the CWA to dislodge Diaz than Hawkins, in part because a wide field of challengers opposes her, including a recent party-affiliation-changed challenger apparently publicly irritated at Diaz’s association with Christie.

Sources in Perth Amboy describe the Salado campaign as an energetic outpost on Smith Street.

Insiders attribute part of the muscled-up organizational feel around the Salado effort to campaign consultant Pablo Fonseca, a veteran of Newark’s street wars and the political mastermind behind Mayor Cory Booker’s ascent to power.

But Salado is one of six filed candidates for mayor, and helms a candidacy tormented by the presence of public works advocate Miguel Morales – who chaired a successful Friday night fundraiser at $100 per head and attended by 140 people – and others, notably Billy Delgado, until recently self identified as a Republican.

Delgado derives some organizational potency in part from the perception that Assemblyman John Wisniewski (D-19) and others affiliated with the ruling arm of the Middlesex County Democratic Organization back him. Sources close to Wisniewski say the assemblyman (and state party chairman) has not formally decided to support him, but indeed leans toward Delgado based on polling showing a vulnerable incumbent.

Wisniewski worries about going full-bore for Delgado based on the appearance of a field too big for anyone to credibly dethrone Diaz. But the perceived Delgado/Wisniewski stealth alliance plants Wisniewski  against his 19th District ticket-mate, state Sen. Joe Vitale (D-19), who supports Diaz.

The Vitale versus Wisniewski back story continues to fuel speculation in Middlesex County about a coming re-election collision between the lawmakers as they assess putting together their 2013 tickets. Part of the early political finesse game includes Wisniewski’s consideration of a statewide option as a gubernatorial candidate.

Sources close to Wisniewski say he feels confident about staying on his feet in the end as he heads into a district showdown with Vitale (and Woodbridge Mayor John McCormac and Diaz), but few discount the likelihood of a dustup along the way, including in Perth Amboy. 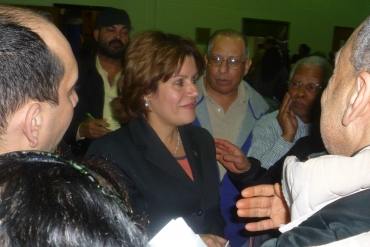