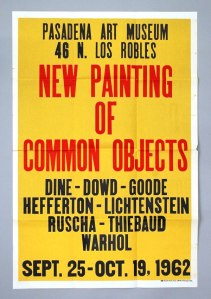 Here’s a little fact that’s sure to impress at this evening’s cocktail: today, Sept. 25, is the 50-year anniversary of the opening of “New Painting of Common Objects,” the early Pop art show that Walter Hopps organized at the Pasadena Art Museum. (A tip of the hat to the Facebook page of the Norton Simon Museum—formerly the PAM—for alerting us to the news.)

The show featured eight young artists—Jim Dine, Robert Dowd, Phillip Hefferton, Roy Lichtenstein, Edward Ruscha, Joe Goode, Wayne Thiebaud and Andy Warhol. (No ladies.) Some were on the verge of widespread fame, and this was, by some accounts, the very first museum show of the new, deadpan, figurative art that they made.

According to the Norton Simon, Mr. Ruscha made the poster (reproduced above) through his trademark move of calling up a commercial sign maker and literally phoning it in. Which is why it looks like it’s promoting some sort of concert or boxing match. (He used to do the same thing at Ferus, the gallery that Mr. Hopps started in Los Angeles, before leaving to become a museum curator.)

By itself this anniversary is admittedly not exactly the most newsworthy event, but there’s more to say! Hopps’s show is in the air at the moment. MoMA PS1 has an exhibition on tap for Oct. 21 called “New Pictures of Common Objects.” It’s curated by assistant curator Christopher Y. Lew and has five artists: Trisha Baga, Lucas Blalock, Josh Kline, Margaret Lee, and Helen Marten. According to the museum’s release, it’s going to look at how those artists “recognize the elastic and diffuse nature of images, utilizing pictures to challenge expectations of genre, form, and meaning.”

Happily, though the Pasadena show closed after just a little more than three weeks, MoMA PS1’s runs for more than two months, through Dec. 31.