It was heartbreaking for former Trenton Public Works Director Eric Jackson to barely lose to Tony Mack in the 2010 mayor’s race and then watch his city unravel after Mack beat Manny Segura in the runoff.

“While I am in an excellent opportunity in Plainfield, Trenton is my home and I would be happy to run if the opportunity presents itself,” Jackson told PolitickerNJ.com.

That opportunity may have presented itself today in the form of a handcuffed Mack, the long-embattled mayor who today stands officially charged with accepting $119,000 in bribes.

But Jackson said it’s not time for Mack to resign – yet.

“My understanding right now is he was arrested by the FBI,” said Jackson. “As we move further, once and if he is indicted I think it would be appropriate for him to resign. It’s a sad day for the City of Trenton to see its leader embroiled this way. My prayers go out to the mayor and his family, but we have to look out for the city’s future.”

Public works director under former Mayor Doug Palmer, Jackson said he believes he would provide a break from the troubled Mack era.

“I have proven experience and I know my skill set can benefit the city,” he said. “It’s been very difficult to watch our city spiral downward, but I have a prayerful heart for the future.

“There’s been a larger number of people approaching me to run, especially over the course of the last 90 days,” he added. “The city needs experience, and I am interested in coming back. Yes, it is serious, and I continue to have conversations with folks throughout the Trenton region.” 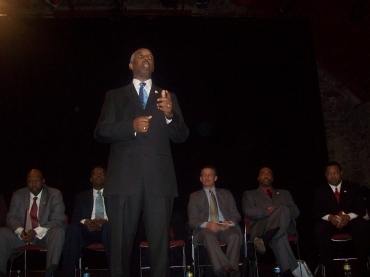