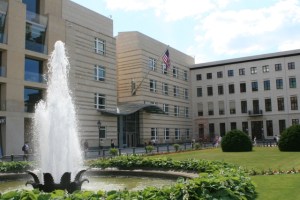 The Foundation for Art and Preservation in Embassies has announced that six screenprints by Jackson Pollock will be installed in the U.S. Embassy in Berlin. In addition, eight photographs by Lee Friedlander will go up at the U.S. Mission to the United Nations in New York City.

The Pollock screenprints were donated by the Pollock-Krasner Foundation to mark FAPE’s 25th anniversary in 2011, and the artist’s centennial in 2012. They are installed alongside 65 other artworks and two site-specific installations. The Friedlander photographs are displayed in New York alongside work by more than 50 other American artists.