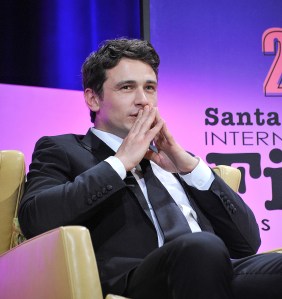 This year James Franco, the actor, writer, artist and all-around renaissance man, will teach a course at one of the art world’s most respected and theory-oriented academies, the California Institute of the Arts (CalArts).

The course is offered by the institute’s School of Film Video and will have eight students collaborate over the course of the year to make a film based on D.J. Waldie’s Holy Land, a postmodern memoir set in a Lakewood that possesses, according to Michiko Kakutani, “a certain surreal quality, as though it were a model for David Lynch’s Lumberton or Twin Peaks.”

Development of D.J. Waldie’s visionary history and memoir of Lakewood, California, ‘Holy Land: A Suburban Memoir,’ into a feature length film comprised of several chapters directed by an ensemble of filmmaking students. Each section will represent a diverse cinematic approach or modality aesthetically coalesced under the tutelage of James Franco. Students will be expected to conduct extensive research into the memoir’s period (1950s) and place (Lakewood, California) exploring the rise of the aerospace boom and insidious spread of prototypical suburban ‘utopias’. The research will contribute to a common visual language and context for the story beats. Shooting exercises might include landscape work and scene study with actors to discover performance styles/s suited to the project. While questioning the veracity of memory, the adaptation of ‘HOLY LAND’ will illustrate a period of California history that resonates contemporaneously, projected on a landscape of personal work expressed within a filmmaking collective.

The class meets once a week and the students in it come from a wide variety of disciplines.