Cabs and bikes and walkers, oh my! (Matt Chaban)

Raju Mann, chair of Community Board 5’s transportation committee, said there had been a few complaints about the project, but generally people seemed to like it, himself included. “CB5 has heard some operational complaints from the residents of the CitySpire condo, like cab pick-up and drop off, loading challenges and trash pickup, and we’re working with DOT to sort through these issues,” he wrote in an email.

“Walking these blocks quite frequently the through block crossings do make the stroll through Midtown noticeably more pleasant but we need to continue to work with DOT to refine and address the aforementioned logistical issues.”

On 6½th Avenue, after Ms. Sadik-Khan departed from a down-and-back stroll to 57th Street, The Observer stopped a group of three casually dressed gentleman outside the UBS Building, where they worked. They said it made crossing the street to the Duke Cafe, one of those bland Midtown lunch spots, considerably easier. “I like it, but I wouldn’t say it’s had a material impact on my daily life,” Michael Ventura said. One of his colleagues wondered how much “taxpayer money was wasted” on the project, while the other said he liked the crosswalk but had not even noticed the new street signs.

Nearby, Elaine Grubbins and Mark Davies were sitting on one of the granite benches, enjoying a coffee break. They said they often make their way over from their offices across the street for a breath of fresh air. “I used it every day on my walk home,” Ms. Grubbins said. “It’s always fun to see what’s playing at City Center, even if I’m not going to go.”

“I think all of the stuff the mayor’s been doing on redesigning the streets has made a huge difference,” she added. “It’s very smart.”

It was nearly impossible to flag down a cab, this being rush hour, but The Observer managed to corner Ali Nawaz as he was dropping off a pregnant woman coming home from a shopping trip. He offered to help her carry her stuff inside, but she insisted she could handle it. Mr. Nawaz’s feelings were about what you would expect.

“It’s a really stupid idea, like what they did with all the traffic. It’s a waste of money, like these fucking bike lanes—everywhere!” he growled, arms crossed. “Where are you supposed to drop people off? You saw, I had to back in here around this damn stop sign, blocking traffic. People want you to drop them off exactly where they want to be dropped off.”

“This job really gets worse and worse every day,” he said, hopping back into his cab.

In the open-air passage between 53rd and 52nd Streets, Michael Tucker was walking his shih tzu, Cooper. “How you doing, gorgeous?” a man lounging on one of the benches said to the dog.

Mr. Tucker happened to be visiting from Virginia, making his annual trip with his wife. They always stay at the Hilton across the street, he said, and yet he had never noticed 6½th Avenue before the crosswalks had been put in. “My wife’s family is from here, and we’ve been coming for 20 years, and this just makes so much sense to me,” Mr. Tucker said. “It makes things so friendly for out-of-towners like us. You don’t expect common sense from a bunch of city slickers.”

Yet not everyone finds such projects to be common sense. At 55th Street, The Observer tried to stop a group of four women who clearly were from out of town. They looked confused and kept going, but a woman walking at a full New York stride pushed her way past them and moaned.

“I think it’s stupid,” Hope Kay declared, clutching a copy of the Times. “This is all about the tourists. Like everything else in this city the mayor has worked on. This is not for the office workers, not for the locals, no sir. One of the last oasis from the avenues, this was our secret, somewhere you could actually walk. This is what we’re actually wasting our money on, to slow down the traffic to make it safe for tourists.”

But didn’t the crosswalks make it easier to cross the street?

“That’s absurd. I’ve never had a problem crossing the street. I’m not a child.”

Ms. Kay confided that she used to live on the Upper West Side and walked this route home, but she had recently been priced out of her rental and moved Uptown—another indignity visited upon her by the mayor.

“You were looking for your cranky New Yorker, weren’t you,” she said. “Well, now you’ve got one.” 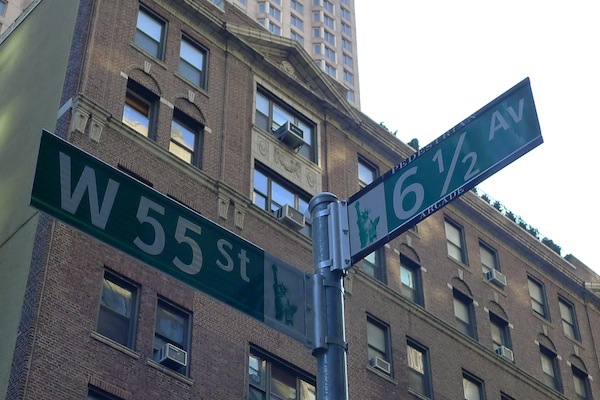