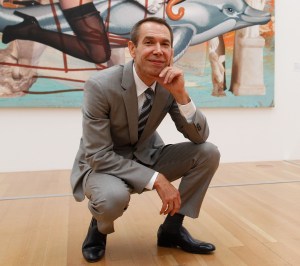 Jeff Koons is having his first exhibition in Brussels in 20 years; it opens Oct. 6 at Almine Rech gallery. And that is news! But far more impressive than that news is the following sentence in the exhibition’s press release which may, as indicated in our headline, be the best sentence in any press release ever released in the history of press releases released to the press.

“Neither Koons nor his art can ever stay static: his oeuvre is like a quivering organism, ceaselessly buzzing with life, producing ever new and more surprising, vivid forms.”

Remarkable! According to this sentence, Jeff Koons’s art is, pretty much, that cavernous, gothic outer space WMD chamber in Prometheus, packed with obsidian vials leaking dark ooze that turns into—well, any number of quivering, buzzing, surprising organisms, such as slickly-fanged worms that invade people’s bodies via the mouth and, in turn, giant mouth-like creatures with countless tentacles and what you might call a violent lust for regeneration (talk about vivid; this is why going to outer space in the first place is a bad idea).

In the context of a reference to a series of major Koons shows that opened this past summer, the Rech exhibition is said to be “expand[ing] again, on this extraordinarily rich and fecund season” and we are told that one of those shows, in Frankfurt, “anchor[ed] his … practice at the heart of a climactic tradition of sculpture” [emphases ours, emphases very much ours]. We are also told that the exhibition will enable us to “penetrate deeper within Koons’s ever more fascinating, and effervescent universe.” But alas, reader, we are not going to go there.