Paterson Mayor Jeff Jones agrees with Gov. Chris Christie that city officials are not talking with each other and until they do, they should not expect state of emergency funds from Trenton.

Christie today at his press conference in Long Branch responded to the city council’s planned vote tomorrow on a resolution asking the governor to declare a state of emergency in the crime-ridden north state city.

Christie laid the city’s problems at the feet of elected officials, both in the administration and on the city council.

“I know our offices have been on the people of Paterson and the elected officials to start working together,” said the governor. “They’re already getting a large amount of state aid. They shouldn’t be asking Trenton for more money.”

Jones said the governor is dead on right.

“I agree with him,” said the mayor. “The council doesn’t make sense. We’ve been working with the state and crime is what it is. We have a problem, and we’re not talking to each other. You know me. I’m trying to reach out and talk with them (the council).”

But they’re not responsive, he added.

“They haven’t come to me, and I’m not going to be part of the back end of conversations,” said Jones.

“We shouldn’t have to ask the mayor to talk to us,” said Sayegh. “If there’s a failure to communicate here, it’s on the mayor. He should be speaking to us about public safety issues. He doesn’t lobby us and he doesn’t come to council meetings.”

Sayegh said he is still weighing the pros and cons of the proposed resolution.

“I’m concerned about sending the wrong message,” the councilman said. 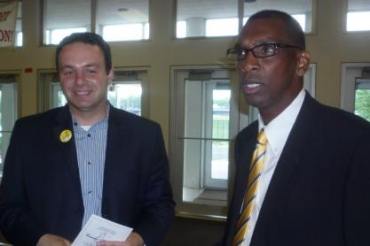