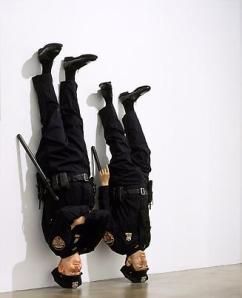 ‘Frank and Jamie’ (2002) by Cattelan. (Courtesy the artist and Marian Goodman Gallery)

“I think the simpler something seems, the harder it actually is to do,” Heidi Zuckerman Jacobson, the CEO, director and chief curator of the Aspen Art Museum, told Gallerist by telephone earlier this week. She was explaining the challenges posed by an exhibition she has organized for Chelsea’s Flag Art Foundation: she’d set herself the task of choosing only artworks that she finds humorous.

It sounds easy, but vanguard art has long had what you might call a humor problem. When was the last time you really burst out laughing while looking at modern or contemporary art? It’s tricky to deliver a killer punch line in a field that celebrates things that are multivalent and ambiguous, and has for decades eschewed narrative and everyday life. And abstract art is not funny. Ever.

Ms. Jacobson has assembled pieces by more than 25 artists for the show, which opens Friday and is called “Funny.” There is a shelf with a strainer and a soap dispenser in the colors of the American flag (by Haim Steinbach), two life-size wax policemen standing on their heads (Maurizio Cattelan) and “time-tested jokes,” courtesy of Richard Prince paintings. Big stuffed animals that appear to be breathing (by Swiss duo Fischli/Weiss) will arrive a bit later, directly from an exhibition at SFMOMA.

“It’s my sense of humor, which is not necessarily everyone else’s,” Ms. Jacobson cautioned. The wily sculptor Darren Bader has made a few pieces about hair; we’ll withhold the details in order to preserve the humor.

Jokes tend to work because of their immediacy—you land a punch line. But good art, the cliché goes, takes time. It rewards prolonged contemplation, which is generally the enemy of humor. “Some of the works definitely have that kind of slow burn,” Ms. Jacobson said. “If you’re looking for a quick laugh, you might get that in some pieces, but if you’re looking for a full experience, you might have to dig in a little bit.”