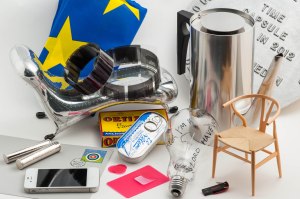 Today, the London Design Museum breaks ground on its new building, and to mark the occasion, the museum will bury a time capsule in the building’s foundations. Listen, we’ve never told you this before, but here at Gallerist, we basically love time capsules.

Here’s a list of the contents, chosen by people in the field of architecture and design, including members of the Design Museum’s board of trustees:

Zaha Hadid
Model of the MAXXI museum in Rome
Book by Patrik Schumacher, The Autopoiesis of Architecture, Vol.1: A New Framework for Architecture

We particularly enjoy the combination of the iPhone, the anchovies and the good bottle of Burgundy 2012. Sounds like you got yourself a damn fine evening on your hands, future person who discovers this mysterious capsule from long ago.

People of the future! Behold! We were sort of O.K. as a culture but only if you overlook a number of very serious faults!