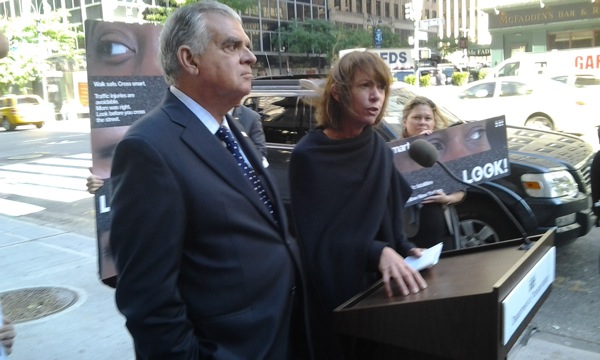 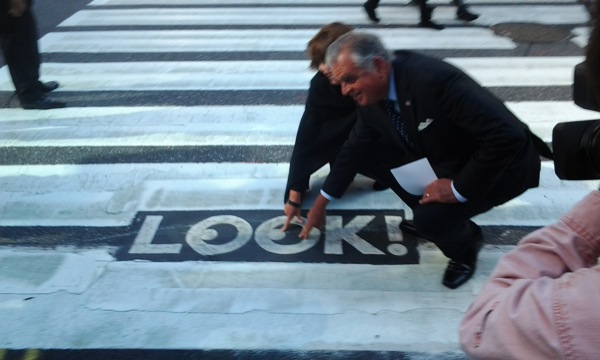 Don't play in the street.
mchabanobserver

The new logo was designed by Pentagram.
mchabanobserver 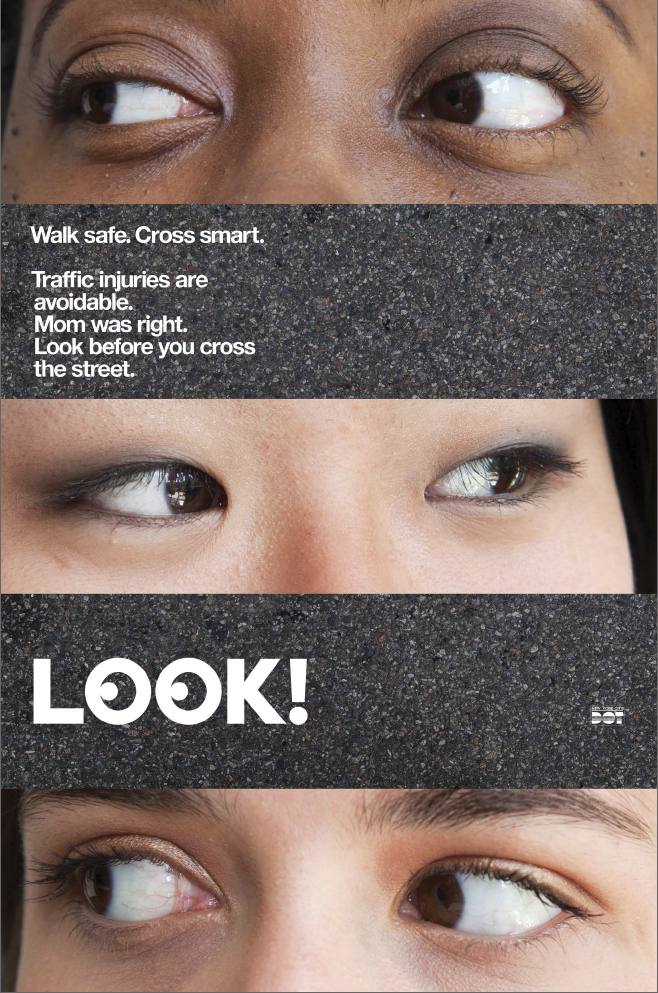 In addition to the decals, new ads at bust stops and subway entrances will help remind people to pay attention.
mchabanobserver
Advertisement 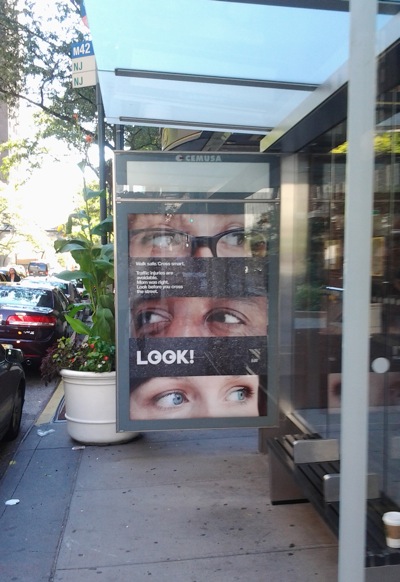 Here is one near the intersection of Second Avenue and 42nd Street.
mchabanobserver

New ads will also appear on the back of buses, as a warning to drivers.
mchabanobserver 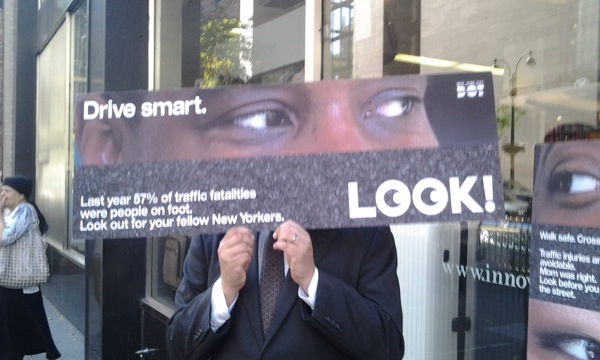 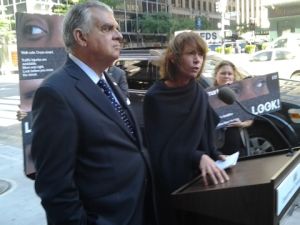 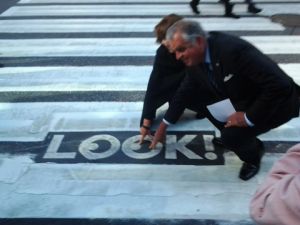 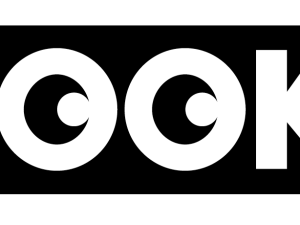 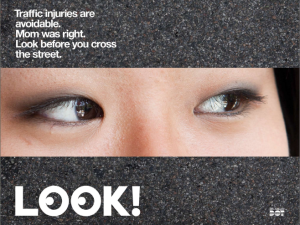 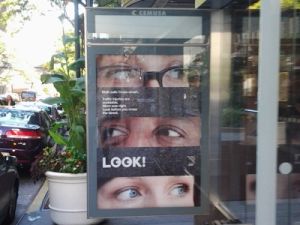 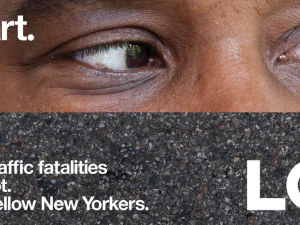 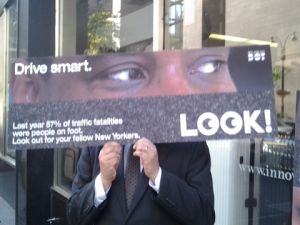 What are you looking at?

When it comes to crossing the street, the city’s Department of Transportation hopes the answer is oncoming traffic—and not your smartphone or your beautiful European model boyfriend.

As any good three-year-old could tell you, always look both ways before crossing the street. But harried, hurried and distracted New Yorkers (and perhaps not a few New Yorkers) are ignoring the rules they learned in preschool, so the department has launched a new campaign to nudge as all into paying more attention when crossing the street.

The heart of the program is a cleverly designed LOOK logo, created by design impresario Michael Bierut and his team at Pentagram. Turning the O’s into anthropomorphic eyes, the graphics provide an arresting reminder to straight-ahead New Yorkers. Especially when they are seared into the pavement of some 110 crosswalks at the city’s most dangerous intersections.

“We need New Yorkers to look out for one another,” DOT commissioner Janette Sadik-Khan told reporters assembled at the corner of Second Avenue and 42nd Street, deemed one of the dangerous intersections (DOT data was used to identify the most high-impact locations).

A neighboring bus shelter featured a LOOK ad, part of the second half of the campaign. “Walk safe. Cross smart,” it reads, featuring a set of three multicultural eyeballs. “Traffic injuries are avoidable. Your mom was right. Look before you cross the street.”

Similar ads will be posted at bus shelters and subway entrances near the 110 intersections, and in a push to get drivers’ attention as well—after all, they are the ones wielding the multi-ton weapons targeted by DOT in these accidents—on the backs of buses. “Drive smart,” it warns. “Last year 57 percent of traffic fatalities were people on foot. Look out for your fellow New Yorkers.”

It was a theme repeated by the commissioner. “More than half of all accidents occurred where pedestrians have the right of way, so while it may not be their fault, it doesn’t hurt to be paying attention,” she said.

She was joined by U.S. Transportation Secretary Ray LaHood, who spends much of his time campaigning against distracted driving. “I can’t think of a place I would rather be because we’re talking about safety,” Mr. LaHood said. “Janette has been a real leader, and as a result, this is the only city in America that I know of that has this campaign, but I’m sure it will catch on.”

The two transit czars pointed out that the nation saw some 416,000 injuries and 3,092 fatalities last year because of distracted driving. New York accounted for 9,200 of those injuries and 41 of those deaths.

“The majority of these accidents are in urban environments just like this street corner, and a majority of them are because of someone looking at their email, talking to a friend, not paying attention, whether they’re driving or walking.”

Ms. Sadik-Khan said the department was “using every tool in the toolbox” to tackle the problems of safer streets. She said the idea for this project came to her while in London, where their busy intersections warn visitors to “Look Right” because those silly Brits drive on the wrong—or is it right?—side of the road.

The street stamps cost about $60,000 to create and install, with most of that money coming from the Federal Highway Administration. Commissioner Sadik-Khan has a way of getting the feds to pay for her traffic calming programs given their impact on reducing accidents. It’s a national issue, and such. The ad buy for the next six months cost $1 million, and in away funds mass transit because they will be paid to the MTA.

Following the press conference, the commissioner and the secretary made their way for the intersection for the photo op. As they are wont to do, a gaggle of half a dozen photographers walked backwards ahead of them, snapping away. They backed right into the intersection, too, clearly ignoring the LOOK sign at their feet as cabs and black cars whizzed by.

As her press secretary tried to hustle the photographers back onto the sidewalk—”Just wait for the light, we’ll wait for the light,” he yelled—Ms. Sadik-Khan could barely contain a smirk that seemed to say it all: When will they ever learn?