Federal agents this morning arrested Trenton Mayor Tony Mack on charges he conspired with a local restaurant owner to approve a city parking garage in exchange for cash payments in envelopes and relied on his brother for the biggest dollar collections.

After months of intrigue, the FBI has linked the long-embattled mayor to $119,000 in bribes for a parking garage project on East State Street in the city.

According to the criminal complaint filed against the men, Giorgianni met with a confidential witness on Sept. 14, 2010 at JoJo’s.

A developer wanted the support of the mayor to build a parking garage. In exchange for the mayor’s support, the developer was willing to make a corrupt cash payment to Mack and Giorgianni.

Identified at various times in the complaint as Napoleon, Honey Fitz and the Little Guy, Mack allegedly used Giorgianni as his chief go-between to work the deal.

In the compaint, the JoJo’s Steakhouse owner brags of being able to do things “the Boss Tweed way.”

He communicated with Mack via text message and telephone, according to the complaint.

On Nov. 16, 2011, Giorgianni and Mack met at Harrah’s Resort in Atlantic City. Video survelliance of the meeting shows Giorgianni walking into the encounter with Mack with a folded-up paper and Mack going empty-handed, the feds said.

On Jan. 6 of this year, Giorgianni again allegedly met with the CW purporting to represent the parking garage.

According to the criminal complaint, at the meeting the restaurateur accepted two cash payments of $2,500 each. The CW told Giorgianni he needed a “guarantee” because a second CW had to spend $500,000 to proceed with the planned parking garage project.

Mack later met Giorgianni at JoJo’s, according to the compaint.

On March 21, Giorgianni confirmed to CW 1 that the mayor backed the parking garage.

On April 12, according to the complaint, Giorgianni took another cash payment, split equally in two envelopes, from the CW.

On April 16, a Trenton official (identified in the complaint as Trenton Official 1) confirmed in person to CW 1 that the mayor backed the project.

Mack and Giorgianni scheduled a meeting for April 25 at the Borgata in Atlantic City, according to the complaint.

“If somebody tries to take pictures with us, just say like, you know… we don’t take no pictures here,” the mayor said in the complaint.

He indicated that the contents were for the mayor and gave the envelopes to the restrauant owner.

On April 30, according to the complaint, Mack’s brother allegedly received the payments at JoJo’s Steakhouse from Giogianni.

“On May 21, 2012, during a recorded meeting that occurred inside JoJo’s Steakhouse, Giorgianni accepted $5,000 from CW 1 for Tony F. Mack’s and Giorgianni’s benefit in exchange for (Mack’s) official action with regard to the development of the East State Street Lot.

Giorgianni proposed that Mack would set the sale price for the East State Street Lot at $100,000 and that the $100,000 difference in the price would be shared by Mack, Giorgianni and CC-1.

The feds allege that Mack’s brother later collected a $25,000 bribe payment at the steakhouse and more subsequently. 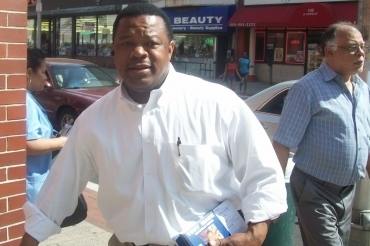