Madonna, doing what she does best: rabble-rousing.(YouTube)

This is how Madonna endorses political candidates: by playing on a widely-held falsehood about his religious upbringing. During her second night in D.C. on her already controversial MDNA tour–what with all the pub(l)ic nudity and swastikas superimposed over heads of state–she encouraged voters to support Barack Obama, “the black Muslim in the White House” who’s “fighting for gay rights.” Then she said “You all better vote for f—ing Obama, okay,” before promising to take her clothes off if he wins.

This will definitely play well in the red states.

With celebrity endorsements like hers, who needs invisible chairs? 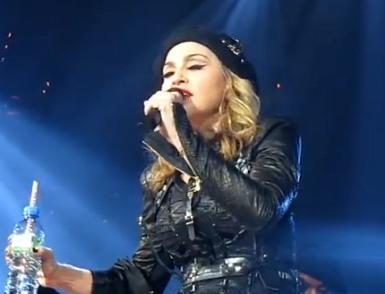