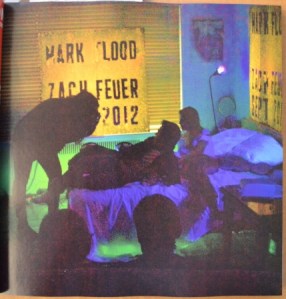 The Zach Feuer ad in the current ‘Artforum.’

Having conquered the Upper East Side (Luxembourg & Dayan, to be precise) and Chelsea (Zach Feuer), Mark Flood will soon take Brooklyn with a show of his black light paintings at a basement in Bushwick.

He’s even made a video for the show:

And here’s the full press release:

Mark Flood
BUSHWICK BASEMENT
Artstar to show in the basement of an apartment in Bushwick.

Grimm Schultz Gallery is pleased to present its inaugural show, BUSHWICK BASEMENT, an all
blacklight exhibition of ultraviolet paintings by artist Mark Flood. The exhibition opens October 5th and will be on view through October 28, 2012.

A reception for the artist will be held on October 4th at 6PM followed by a rooftop soirée for select beautiful guests. The gallery will accept
general public Friday October 5th beginning at 6PM.

Grimm Schultz began as an underground dogfighting ring in the heart of Brooklyn’s most underrated
borough, Bushwick. After tearing out paper thin walls, haunted memorabilia, and other traces of a dark past–an exhibition of Mark Flood’s blacklight paintings was obviously the next step.
Grimm Schultz is the first gallery to host the mass exodus of Artstars flocking to the outer reaches of unsettled New York City. For this exciting show Grimm Schultz will present Mark Flood: BUSHWICK BASEMENT
entirely under black light.

“Last month I was a big Art Star,
But I’m going down to the underground
Cuz that’s where the worms are.
Bushwick basement.”

Mark Flood has recently exhibited his eighties work in THE HATEFUL YEARS at Luxembourg & Dayan as well as his last museum-like exhibition, ARTSTAR,
currently on view at Zach Feuer Gallery. BUSHWICK BASEMENT is Mark Flood’s first exhibition of exclusively black light paintings and the most comprehensive display of Mark Flood’s blacklight paintings ever.