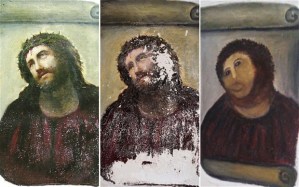 ‘Ecce Homo’ by 19th-century painter Elías García Martínez on the walls of the church of Santuario de Misericordia. (Courtesy Gawker)

The old woman who ruined the fresco in Spain now wants royalties. [The Daily Telegraph]

Piss Christ is back in New York. Will it be controversial? The Post sure hopes so! [Page Six]

Sotheby’s will offer a red, blue and pink Rothko in November that is estimated to fetch $35 million to $50 million. [WSJ]

A painting purchased at a golf club auction about a decade ago for around $6,000 may be a lost work by J. M. W. Turner. [The Guardian]

New York Public Library approves plan to construct 30,000 square feet of additional space underneath Bryant Park thanks to an $8 million grant by Library Trustee Abby S. Milstein and her husband Howard P. Milstein, keeping most of the research books on site. [WSJ]