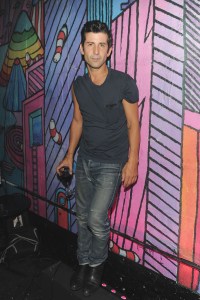 André Saraiva and Details will present some graffiti at 1 Prince St. through Oct. 3. [Page Six]

“Conceptualism, which 40 years ago proposed trashing museums altogether, is now assuming old master status in them,” Holland Cotter writes. Pretty excited for the Brooklyn Museum’s “‘Six Years’: Lucy R. Lippard and the Emergence of Conceptual Art” show over here at The Observer office, let me tell you. [NYT]

Norman Rockwell’s The Four Freedoms served as a backdrop for naturalization ceremonies at the Norman Rockwell Museum in Stockbridge, Mass. [ArtDaily]

In what he admits is a “bad pun,” John Baldessari makes a “T” of golf tees for T Magazine. [T Magazine]

Ken Johnson offers a preview of some shows in Los Angeles. [NYT]

After his studio was destroyed in a fire, James Rosenquist unveils new work. [WSJ]

Sizing up Arab graffiti. [The Guardian]