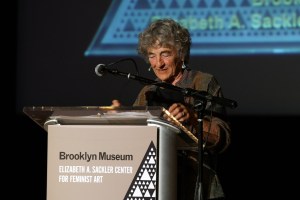 The Met is considering a proposal to stay open on Mondays so that it is open seven days a week. The Prado, the Smithsonian museums and the MFA, Boston, already operate throughout the week. “That got me thinking, if others are doing it, why aren’t we?” Mr. Campbell said. [NYT]

In other museum policy news, the Getty, LACMA, Hammer would like to be free, can’t be. [LAT]

Robert McNamara’s papers and various other memorabilia head to auction at Sotheby’s. He was a apparently a “meticulous pack rat.” [ArtsBeat]

“I always say that conceptualism and feminism were the two things that changed my life,” Lucy Lippard says in a video interview in advance of the Brooklyn Museum’s show based on her Six Days book. [Artforum]

A look at the University of Chicago’s involvement with artists. They just named artist Theaster Gates the school’s director of the Arts and Public Life Initiative. [WSJ]

Gagosian Gallery’s total square footage across its 13 locations—including its soon-to-open second gallery in Paris—is now greater than that of Tate Modern. [The Art Newspaper]

“Mummy, why is there a dead cow in a box?” Says The Independent, “It’s hard to teach children to love contemporary art.” [The Independent]

The Jean Arp foundation is moving to Berlin and looking for a new curator. [The Art Newspaper]

“For us, irony is not a by-product of slippage but a product of complaisance, denial, and delusion. No way is it a strategy! It’s the self-congratulatory coping mechanism of those who have all but given up hope.” The Bernadette Corporation chats with Artforum about their retrospective at Artists Space. [Artforum]