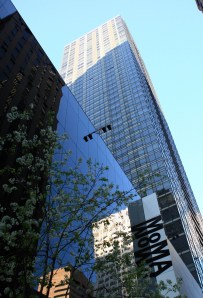 The Museum of Modern Art announced today that, beginning in May, it will stay open every single day of the week. The museum is currently closed one day a week, on Tuesday. The news came to us via The New York Times, which noted that the Metropolitan Museum of Art recently said that it was studying whether to go to an around-the-week schedule.

Carol Vogel of The Times provided some context:

“The museum was open every day since its founding in 1929, until 1975, when it closed one day a week (originally Wednesdays) to reduce operating expenses.

MoMA’s director, Glenn Lowry, told the paper that the museum was motivated by the tremendous increase in attendance in recent years (the galleries “are pretty close to being maxed out,” he said), and that it mulled staying open later some nights but that “it was always a myth that everyone really wanted late hours.” The museum has stayed open on Tuesdays during the past two summers so it has experience operating on that schedule.

Now if the Guggenheim goes to seven days a week (it’s open six currently), and the New Museum, Guggenheim and MoMA PS1 go to at least six days (they’re at five now), this is going to become an even more beautiful museum-going age.