Almost a year to the day after she was first arrested for participating in Andy Golub’s nude painting stunt in Times Square, 5-foot-2 model Zoe West is finally getting paid by the city. Though it looks like she’s been charging an hourly rate … and has kept the meter running since she was first brought in.

Ms. West’s lawyer Ron Kuby told The New York Postthat the petite beauty had settled out of court with the city for $15,000 for her false arrest late last August. (Technically, you cannot be arrested for public nudity if it’s for performance purposes.)

“The beauty of New York City is a naked girl can win a nice suit,” Mr. Kuby said, probably after thinking all night about how he was going to phrase it for the paper.

For her part, Ms. West is going to use the money and move to Manhattan to find a job. Hopefully she realizes that getting paid for performance art isn’t something that happens every day here. 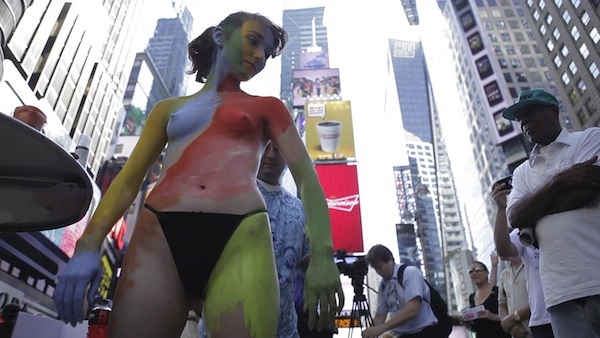