September 11th was Tuesday, which most people remembered, what with “Never Forget” being the slogan for the annual commemoration of those who lost their lives or loved ones when the planes crashed into the Twin Towers 11 years ago. NBC might have forgotten the date, however. At least we assumed that’s what happened when it booked Kris Jenner to talk about reality television and filming her daughter’s fake-boob upgrade on Today, making it the only major network out of the Big Three that didn’t air footage from the Pentagon and Ground Zero to honor the Moment of Silence. We were willing to give NBC the benefit of the doubt, something that the network’s President Bill Capus obviously didn’t want.

According to a memo sent to NBC affiliates obtained by The New York Times, the decision to not air the footage was an “editorial” one:

Yesterday, we made an editorial call resulting in the Sept. 11 moment of silence not being seen. While we dedicated a substantial amount of airtime to anniversary events, we still touched a nerve with many of your viewers … and for that we apologize.

Mr. Capus then went on to note that NBC had only observed the moment of silence once before, during last year’s 10th anniversary. Of course, the problem wasn’t only that NBC didn’t air the same footage as every other network … it was that they filled the time slot with Kim Kardashian’s mom talking about giving her children breast implants as a present. What was the editorial decision behind that? “If we don’t show Kris Jenner yammering about excess frivolity and giving her daughters a terrible body image on national television, the terrorists will win”? 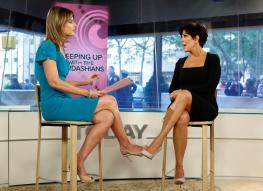