President Barack Obama took some heat for not scheduling a meeting with Israeli Prime Minister Benjamin Netanyahu while the latter leader was in the United States for the U.N. General Assembly this week. The president (sort of) addressed that criticism today by making time to meet Mr. Netanyahu (via telephone). According to a “readout” of the conversation distributed by the White House Press Office, “the two leaders discussed a range of security issues, and the President reaffirmed his and our country’s unshakeable commitment to Israel’s security.”

“The two leaders underscored that they are in full agreement on the shared goal of preventing Iran from obtaining a nuclear weapon. The Prime Minister welcomed President Obama’s commitment before the United Nations General Assembly to do what we must to achieve that goal,” the readout said.

Both men also apparently pledged to continue their “regular consultations” on the Iranian nuclear threat in the future.

“The two leaders took note of the close cooperation and coordination between the Governments of the United States and Israel regarding the threat posed by Iran–its nuclear program, proliferation, and support for terrorism–and agreed to continue their regular consultations on this issue going forward,” the readout said.

The White House also went the extra mile and distributed a photo of the president on the phone with Mr. Netanyahu.

Yesterday, in his speech before the U.N. General Assembly, Mr. Netanyahu used visual aids to express his desire the U.S. will join him in efforts to establish a “clear red line” with the Iranian government before they amass “enough enriched uranium to make a nuclear weapon.” 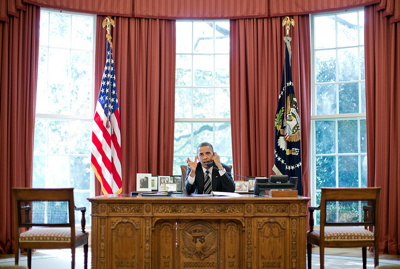