Christie earns a 53% approve to 35% disapprove job rating among all Garden State residents.  Among registered voters, his rating stands at 55% approve to 36% disapprove, a one-point increase in approval among residents and a two-point increase among registered voters compared to the July Monmouth University/Asbury Park Press Poll. Fully 63% of voters say they are not bothered personally by the governor’s style of speaking to or about people who disagree with him.  Only 1-in-3 Garden State residents are bothered – either a lot (23%) or a little (11%) – by the way Gov. Christie deals with his detractors.

“Critics and media pundits might object to Gov. Christie’s confrontational style, but the vast majority of his constituents simply shrug their shoulders.  It’s not a big deal to them,” said Patrick Murray, director of the Monmouth University Polling Institute.

Even so, some of his constituents feel the governor could be more successful if he modified his public behavior.  While most New Jerseyans (51%) say that a change in Gov. Christie’s style would not have affected the amount he has accomplished so far, 28% feel that he could have accomplished more if he acted differently compared to just 11% who say he would have accomplished less. Overall, though, 31% of New Jerseyans say the governor can point to some major accomplishments.  This number is up from 24% who said the same in August 2011.  Another 43% say he has minor accomplishments.  Just 21% say he has no real accomplishments, which is down from 34% just over one year ago.

The governor’s job rating does not seem to be affected by recent news about the state’s credit outlook and unemployment rate, said Murray. To the extent his constituents have been paying attention to those reports, 54% say they have no impact on their confidence in Gov. Christie’s policies, while 17% are less confident and 6% are more confident in the governor.  Another 21% say they are not aware of recent news reports on these matters.

Fifty percent of registered Garden State voters are willing to say Christie deserves another term as governor.  Another 45% feel that it might be time to have someone new in office.  Among registered voters who call themselves politically independent, 51% endorse another Christie term to 41% who want new blood.

The Monmouth University/Asbury Park Press Poll also asked Garden State voters to assess a field of nine possible Democratic challengers to Chris Christie.  Only two have sufficient name recognition to garner an evaluation from more than a third of the electorate.  Newark Mayor Cory Booker is the most well-known, earning a sizable +36 positive rating of 49% favorable to 13% unfavorable.  Former governor and current state senator Dick Codey earns a healthy +20 positive rating of 34% favorable to 14% unfavorable.

Gov. Codey has held positive ratings since he left office, said Murray, having served as the state’s chief executive for just over a year after Jim McGreevey resigned.  However, voter familiarity has dropped since he vacated the governor’s office and was subsequently ousted as Senate president.  Six years ago, Codey had a 53% to 17% rating which dipped to 48% to 15% in July 2008.  By February 2010, fewer than 6-in-10 voters gave him a rating – a still positive 38% to 19%.  Currently, just under half of voters feel they can rate Dick Codey.  [Note:  This is the poll’s first rating of Mayor Booker.]

Another potential challenger to Christie is Senate President Steve Sweeney – who gets a net +3 rating from about one-third of New Jersey voters, 19% favorable to 16% unfavorable.  Congressman Frank Pallone is familiar to 1-in-4 voters, at 17% favorable to 8% unfavorable for a +9 net rating.  General Assembly Speaker Sheila Oliver, while generally not considered to be mulling a run, earns a 14% favorable to 10% unfavorable – or +4 – rating.

“The first step in challenging an incumbent in New Jersey is to attain adequate name recognition.  Right now, only Booker, Codey, and perhaps Sweeney have reached that threshold,” said Murray.

It’s worth noting that at a similar point in the last gubernatorial race (July 2008), then-U.S. Attorney Christie was familiar to nearly 4-in-10 voters and earned a +21 rating of 30% favorable to 9% unfavorable.  Incumbent Jon Corzine had a split voter rating of 43% favorable to 44% unfavorable at that time.  Gov. Christie is in a very different position than his predecessor, claiming a +20 rating of 54% favorable to 34% unfavorable among registered voters.

For the record, Lt. Gov. Kim Guadagno is familiar to 1-in-3 voters, earning a positive 21% favorable to 11% unfavorable rating.  This result doubles her overall familiarity from a year ago.  In October 2011, she earned a 10% positive to 5% negative rating.

Monmouth University/Asbury Park Press conducted the poll by telephone with 805 New Jersey adults from September 19 to 23, 2012.  This sample has a margin of error of + 3.5 percent. 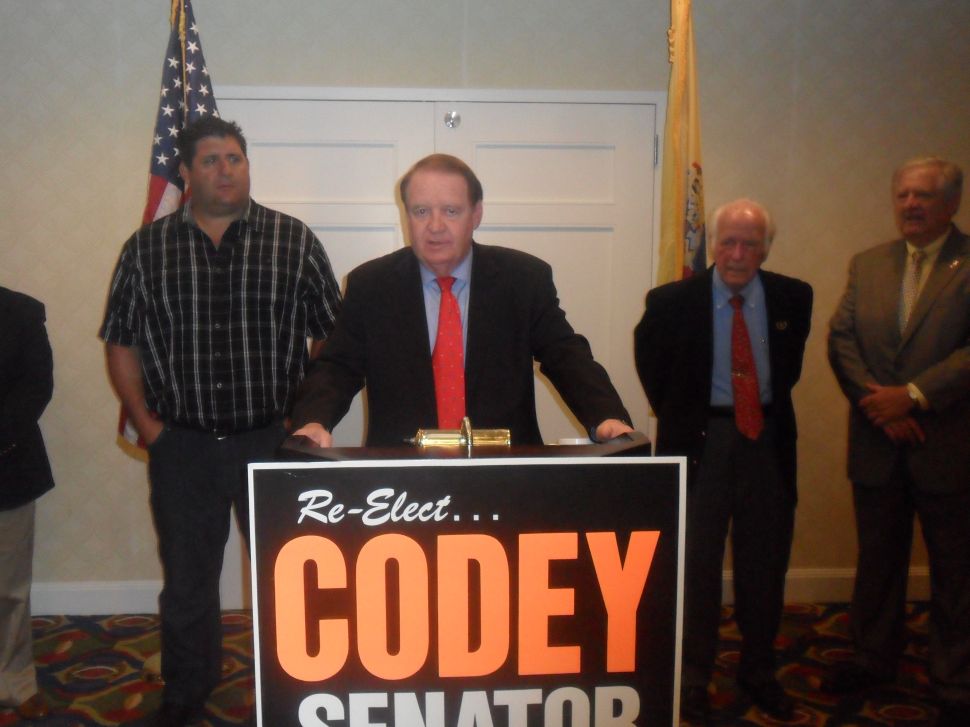