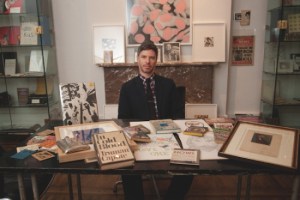 The New York Art Book Fair has released its list of performances, book signings and talks.

Of particular note are three memorials that are planned as part of the 2012 fair: a collection of sales catalogues by the collector and dealer Steven Leiber, presented by Printed Matter; a tribute to the book dealer John McWhinnie, who died in a snorkeling accident in January, which will include a complete collection of the books he published in his lifetime; and “An Homage to Mike Kelley,” which is being billed as “a portrait in the form of a library” made up of a selection of books picked by various contributors that help define the artist, who committed suicide at the beginning of 2012.

The rest of the line-up is available here. The fair takes place Sept. 28-30 at MoMA PS1.