Last week, Nicki Minaj caused whiplash, turning our heads with her verse on on Lil Wayne’s latest mixtape, Dedication 4. “I’m a Republican voting for Mitt Romney/You lazy bitches is fucking up the economy,” she rapped, causing us to wonder whether this would hurt her chances for judging American Idol … even if she was joking.

Now the hip-hop star is claiming that yes, she was just joking, especially when the POTUS gave her the benefit of the doubt on a recent radio shout-out.

When asked what he thought about Ms. Minaj’s music, President Barack Obama told Orlando’s Power 953, “I think she had a song on there, a little rap that said that, but she likes to play different characters. So I don’t know what’s going on there.”

Ms. Minaj took this full-fledged support of her tunes, tweeting: “Ha! Thank you for understanding my creative humor & sarcasm Mr. President, the smart ones always do… *sends love & support*” 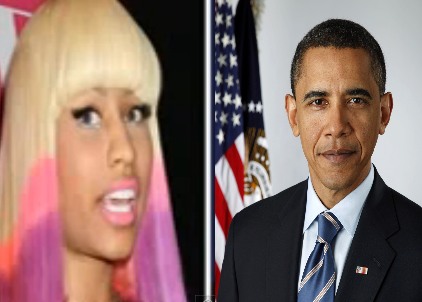