One of the original members of the successful South Jersey Democratic enterprise, U.S. Rep. Rob Andrews (D-1) faces continued scrutiny from a Congressional Ethics Committee over his possibly inappropriate, personal use of $100,000 in campaign funds.

Twice unsuccessful in statewide elections (for governor in 1997 and Senate in 2008), Andrews shows no visible signs of relinquishing his congressional seat as he tries to weather the crisis.

But sources close to the congressman concede that as long as ethics questions dog him, Andrews has a political problem.

No one is talking openly about succession, however, in the event that the congressman decides to retire in the coming months, the following nine names circulate as potential successors to the 22-year incumbent congressman…

You hear it from Republicans a lot, in throw-away conversations designed to make her challenge of U.S. Rep. Jon Runyan (R-3) less credible: she doesn’t even live in the 3rd District. No, she doesn’t. Post 2011 redistricting, the Cherry Hill resident resides in the 1st District, which puts her in play as a successor to Andrews. Consider Adler’s convincing – if underdog – candidacy against Runyan and the fact that New Jersey lacks a woman in the congressional delegation. If Adler performs better than expectations against Runyan, she is well positioned to argue for Andrews’ seat.

The mayor (and former state senator) stands at the forefront of the South Jersey Democratic Party’s effort to build a successful higher education and hospital economy out of the ruins of the City of Camden. She also marshals the woman argument. See above.

President of the non-for-profit charitable foundation at Cooper Hospital, Bass Levin lives in Cherry Hill, where she once served as mayor. Like Shelley Adler and Dana Redd, she brings a combination of political experience and the argument that her election to Congress – barring a win by Adler this year against Runyan – would make her the only woman in the New Jersey Congressional Delegation .

The Assembly Majority Leader appears on track for a career as Speaker of the Assembly, say South Jersey sources. But the Voorhees brand potentially has other options, including a 2013 run for governor – or succession of Andrews as congressman of the 1st District if the seat ever becomes available.

Formerly the Speaker of the General Assembly, the Camden County tavern owner may be past the point in his life where he wants to become embroiled in federal politics. But he remains one of the strongest inner sanctum members of the South Jersey Democratic Party and a respected leader who during his time in the Legislature constructed an impressive support system beyond just the delineations of South Jersey.

Despite some buzz about a Sweeney departure to Congress creaking open the vaults of power in the Legislature, sources in South Jersey say it won’t happen. Sweeney’s stronghold in Gloucester County forms a very small part of the 1st Congressional District, making him an unlikely successor to Andrews. But his leadership bona fides always put him in discussions when South Jersey Dems consider upward political moves.

Two things. First, the state senator has the advantage of being on the top of the totem pole in the 5th Legislative District and second, he’s the little brother of powerful South Jersey Democratic leader George Norcross III.

The mayor of Gloucester Township and former assemblyman has close ties to Norcross. He infuriated opponents when he championed the dissolution of local EMS workers in favor of Kennedy Health System ambulances, but the 1st District is solid Democrat and whoever the organization supports would be expected to confidently walk through any protestations. 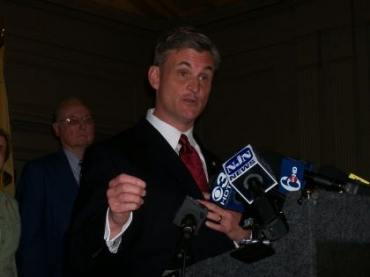