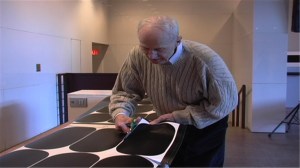 One day back in the 1940s, the artist Richard Artschwager said something to his then-girlfriend during a concert in Vienna, and she shot back, “Shut up and listen.” The phrase stuck with him. “Since then, I’ve adapted that to ‘Shut up and look,’ but meant politely,” he explains in a trailer for a new documentary about his life and work. “What it really means is, ‘I don’t know what to say.’”

It’s become something of a mantra for his art practice, and it also provides the title for the film, which is directed by Maryte Kavaliauskas (who made a documentary about British painter David Hockney about 10 years ago) and produced by Morning Slayter, a private art dealer and appraiser in New York. The pair began work on Richard Artschwager: Shut Up and Look about eight years ago, when he was 80, and shot it intermittently over the next six years. With an Artschwager retrospective set to open at the Whitney Museum on Oct. 25, they are now working to raise money to finish a final cut of the 60-minute film in time for the show.

The film spans Mr. Artschwager’s life to date and his various idiosyncratic series of artworks, including figurative paintings on Celotex, Formica sculptures that look like furniture and “blps,” monochromatic sculptures and wall pieces shaped like knockwursts. His eclecticism has always made Mr. Artschwager, 88, tough to pin down stylistically—he’s been called everything from a Pop artist to a Conceptual artist to a Minimalist, though none of those quite fit. In an interview with Gallerist, Ms. Slayter recalled what Gagosian Gallery director Bob Monk says of the artist in her film: “He’s a school of one.”

Friends and admirers like Guggenheim director Richard Armstrong, philanthropist Agnes Gund, dealer David Nolan and artist Joe Zucker (who likens Mr. Artschwager to “a walking Off Broadway show” and “a living Samuel Beckett”) help tell the story of his life, from his stint as an American intelligence officer in Europe during WWII through his work as a baby photographer, a classical pianist and a furniture-maker. That last profession was curtailed by a fire at his downtown studio in 1958, and Ms. Slater said that he told her it was a “blessing in disguise, since”—with so much of his furniture destroyed—“it pushed him more into the fine-art world.”

“My partner and I dislike talking-head documentaries,” the producer emphasized. Consequently, the film follows Mr. Artschwager as he takes the long walks through nature that inspire him, makes art in his studio in Hudson, N.Y., and attends gallery openings in New York, Los Angeles and Vienna. “It’s becoming a very rich film,” she added, “about a very, very interesting man, who is multifaceted and still drawing and painting every day.”