A still from the Occupy Wall Street raid video released by someone claiming to be affiliated with Anonymous. (Photo: YouTube)

On Sunday, someone claiming to be affiliated with the hacker activist group Anonymous, released a two minute clip containing footage of last November’s eviction of the Occupy Wall Street encampment in Zuccotti Park that they said was obtained from the NYPD’s Technical Assistance Response Unit. While the clip has widely been covered as having been “leaked” from the police, NYPD Deputy Commissioner of Public Information Paul Browne told Politicker the clip was ‘not ‘leaked” and may have been a combination of footage from television news cameras, public court records and even possibly from the occupiers themselves.

Reporters were infamously prevented from getting behind police barricades during the eviction of the Occupy encampment. In Anonymous’ footage of the raid, a narrator said “the authorities made all media leave the scene and the only images of what happened came from one livestreamer who stayed in the center of the park until his arrest and one other citizen journalist” and described the footage as “a trove of video shot by the NYPD itself from 14 different angles including surveillance cameras.” A statement accompanying the clip also said “much of the video” was “edited by the NYPD,” which they accused of “covering up their attrocities [sic] committed November 15th in Zuccotti park.”

Mr. Browne disputed all of these claims.

“It was not ‘leaked,’ and does not show any misconduct by police. Contrary to the narrator’s account, there were scores of protesters who took video with no attempts by the police to confiscate it,” Mr. Browne said. “I saw one protester standing near me who videotaped the same opening scene in the youtube video of officers sawing a chain that two protesters used to chain themselves to a tree in the park. Further, the west side of Zuccotti Park on Church Street was lined with television news personnel and satellite trucks, many of whom filmed events that night.”

The footage released by Anonymous doesn’t appear to show any instances of police brutality or excessive force. Anonymous’ clip does include some footage that appears to have been taken by surveillance cameras as well as audio of a man identifying himself as a detective with the TARU unit. Mr. Browne suggested the surveillance footage and the audio may have come from court records from some of the many lawsuits related to the eviction.

“The TARU’s detective voice, if genine, sounds like it may have be taken from material turned over to plaintiffs who are suing the police. It was not ‘leaked’ by the police, but possibly by someone suing us, and not much of a leak since it’s part of the court record,” said Mr. Browne.

Update (9:02 p.m.): Mr. Browne told us he believes the detective’s voice heard on the video was actually recorded by occupiers who were near him at the time of the eviction.

“We think the detective, as he was making the statement into his own equipment, was taped by a protester standing nearby. In other words, they got his voice, but not his videotape,” he said.

Anonymous’ clip begins with footage of someone wearing what appears to be an NYPD uniform and Anonymous’ signature Guy Fawkes mask. To avoid any confusion, Mr. Browne made clear this was not an actual police officer.

“Also, the video suggests that the image at the start is an actual officer in an NYPD uniform, in addition to the anarchist mask,” Mr. Browne said. “The problem is that the collar brass doesn’t comport with his claimed assignment, and the patch over his right shirt pocket is in the wrong place. It’s a shoulder patch not worn on the shirt. The ‘badge’ on the left shirt pocket is clearly bogus.”

Watch the video in question below. 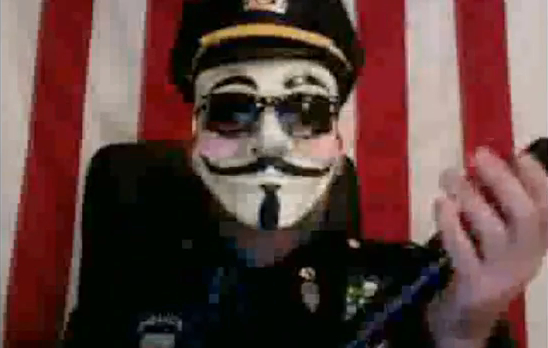