Over the weekend, cement bricks were thrown through the windows of Congressman Michael Grimm’s campaign headquarters on Staten Island in an attack Mr. Grimm initially said he believed the attack was “politically motivated” and that it also left computers in the office with mysteriously erased hard drives. Today, an eighth grader confessed to smashing the windows with a friend, leading Mr. Grimm to admit “it is possible that a volunteer could have inadvertently compromised the computer and failed to report it.”

However, in spite of a New York Times report published Monday that cited an unnamed “law enforcement official” as saying, “police experts had examined the campaign’s computer systems and concluded that nothing had been erased or tampered with,” a spokesman for the NYPD said the investigation into the situation with Mr. Grimm’s computers is just beginning.

“Contrary to the ‘law enforcement official’s’ purported claims in the NY Times, NYPD computer crimes detectives had only just begun this morning looking at images taken from Grimm computers,” NYPD Deputy Commissioner of Public Information Paul Browne wrote in an email to Politicker this evening.

Mr. Browne added that “no determination had been made as whether there was tampering” and “none was likely to be made until much later today or tomorrow because the process is time consuming.”

In his statement following the eighth grader’s confession, Mr. Grimm, who has faced a steady stream of negative headlines in the past few months due to an FBI probe into his 2010 fundraising operation, criticized the media for its handling of the case.

“What is most troubling about this series of events is the shameless media spin and speculation fueled by unscrupulous sources,” Mr. Grimm said. “This is no more than another blatant attempt by the liberal media to generate more bogus allegations against me and continue their ongoing smear campaign.” 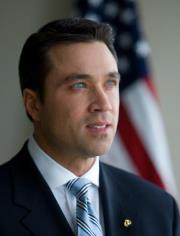