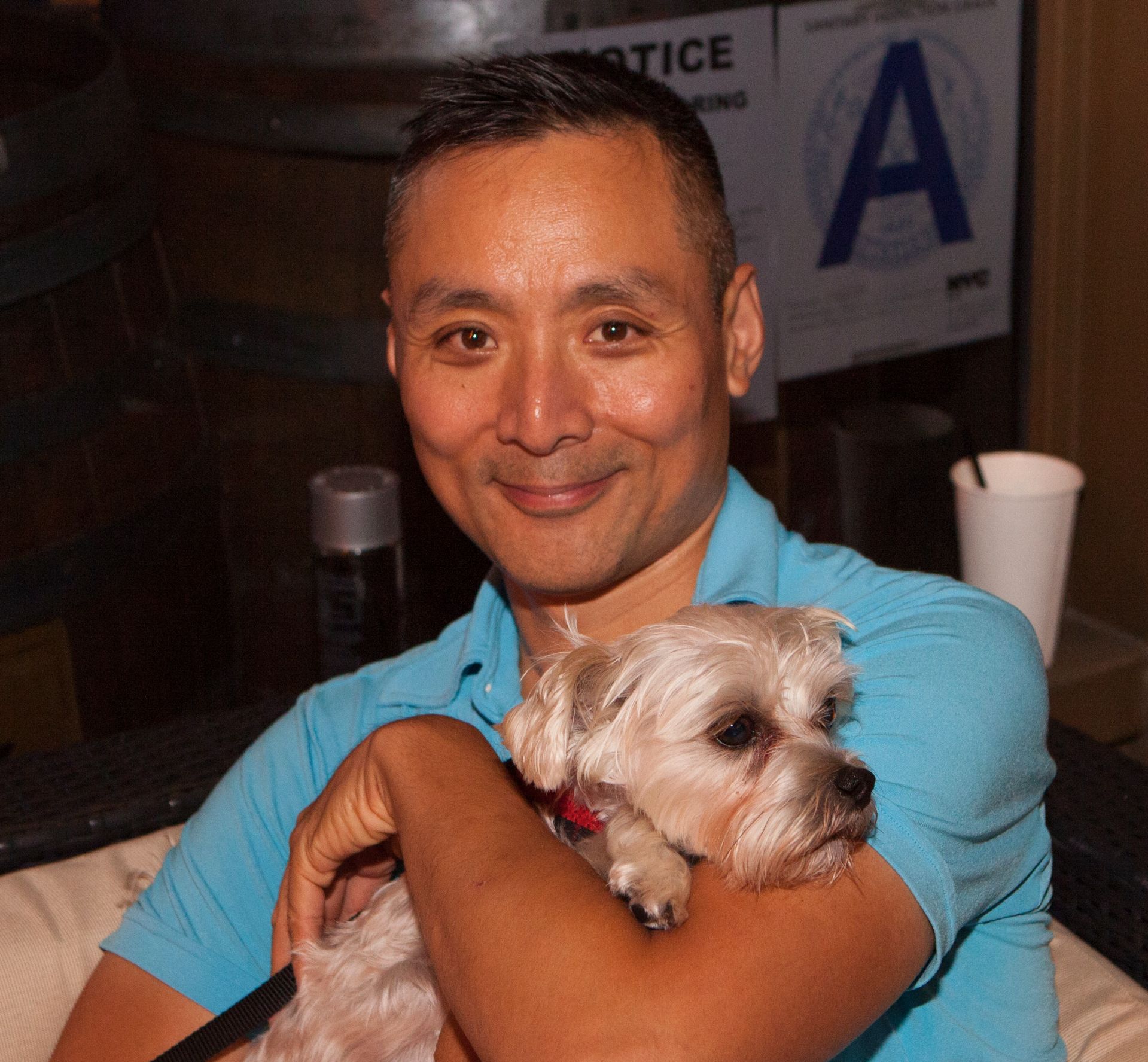 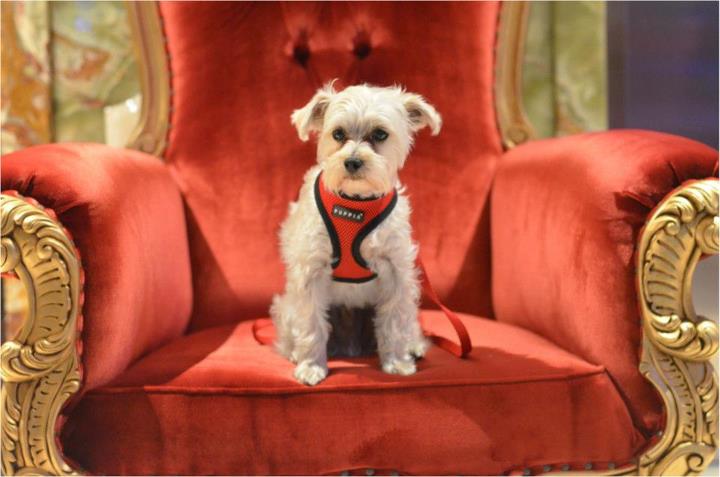 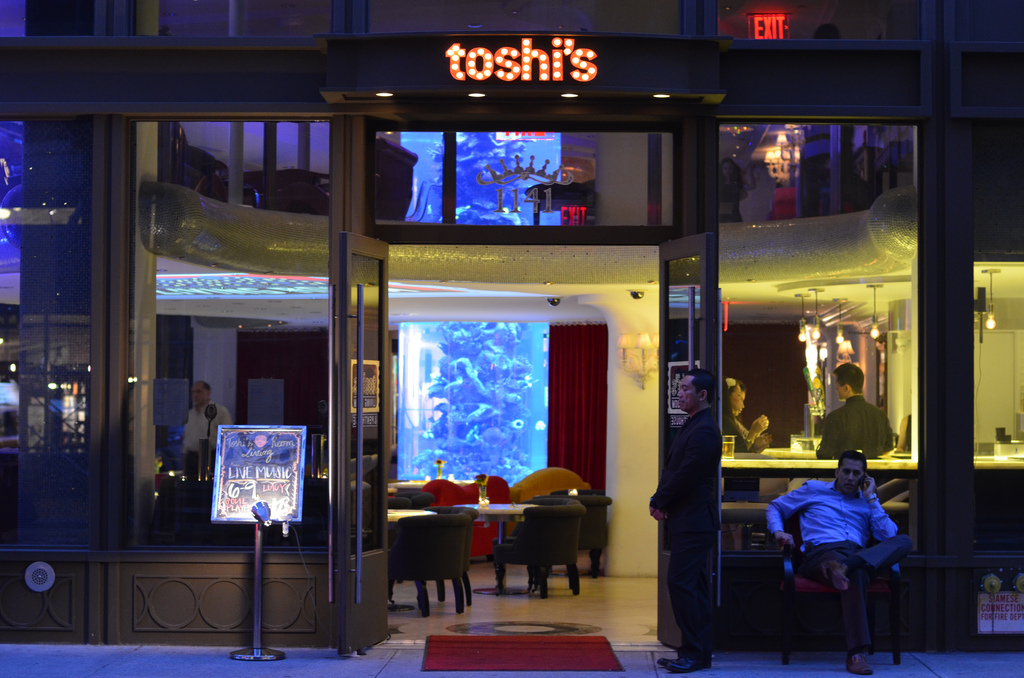 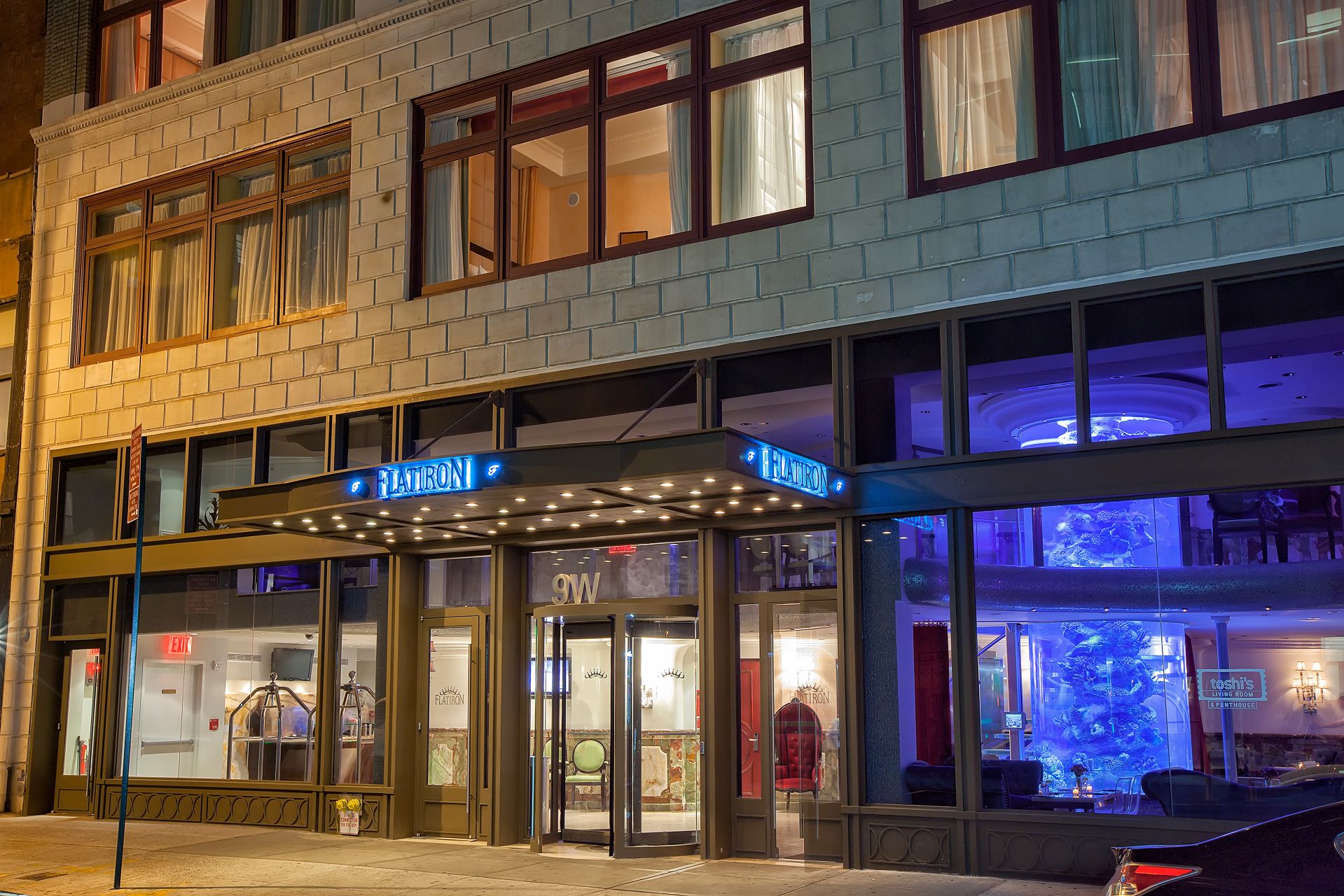 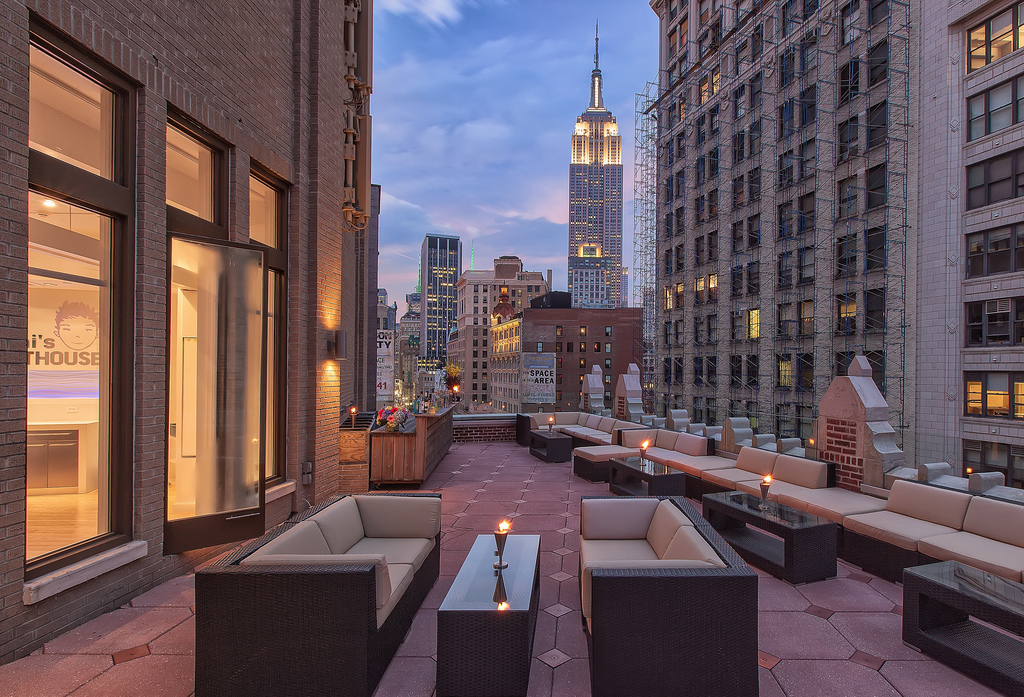 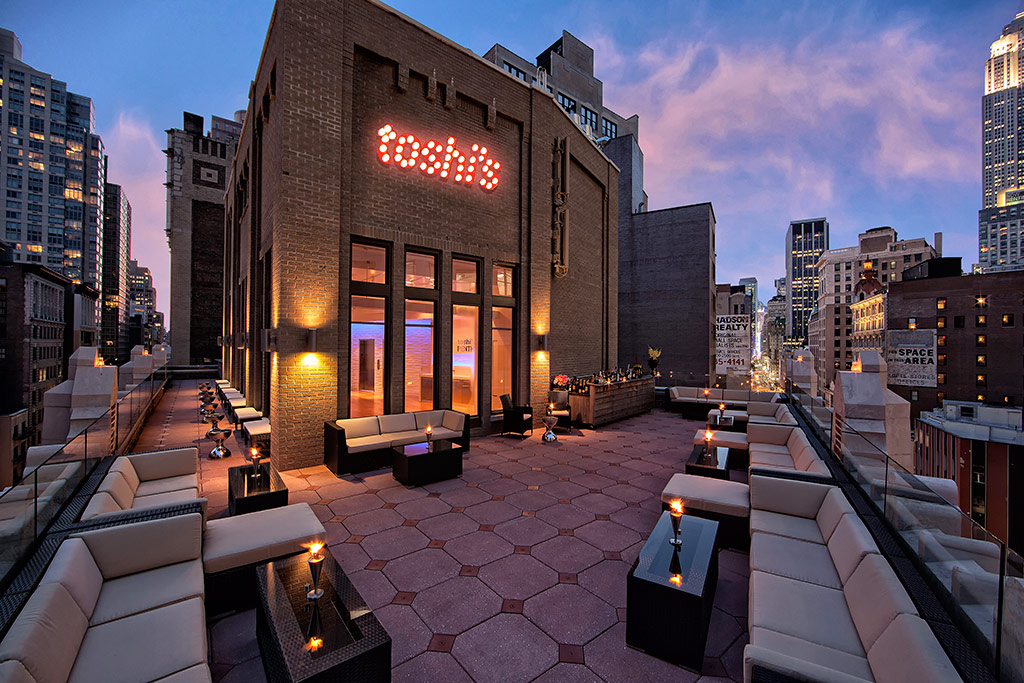 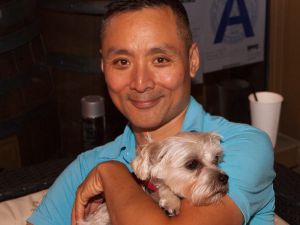 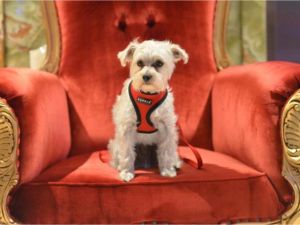 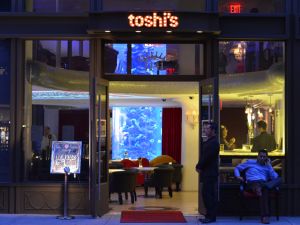 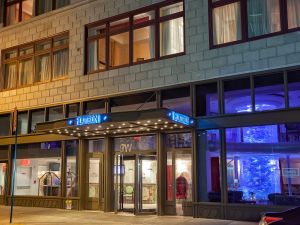 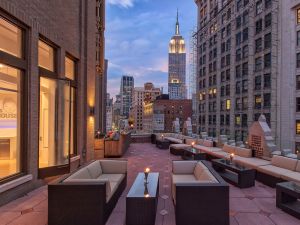 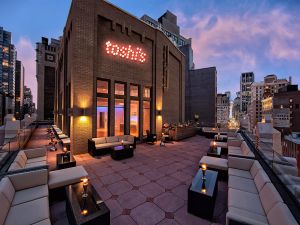 Toshi just wants everyone to have a good time. That’s one of the first things the 38-year-old entrepreneur told The Observer as we sat on the bench outside his Flatiron Hotel. It was only 5:30 p.m., and inside the hotel’s groovy restaurant, brightly colored drinks were passed around as a woman in a sparkly white dress covered a Beyoncé song in a smoky, lounge-y growl.

Through the crowd, you could see into the Flatiron’s lobby, with its two-story cylindrical aquarium filled with exotic undersea creatures, including a remora, a type of suckerfish that resembles a shark and gets around by attaching itself to bigger fish.
The first floor is called Toshi’s Playground. “I just made these signs, look!” said Toshi (real name Robert Chan), pointing to an anime rendition of his dog, Ponzu. Ponzu is a Morkie, we were informed: half Maltese, half Yorkie.

Graphics of Toshi and Ponzu are everywhere: above a red velvet throne that greets customers when they walk in, and almost subliminally painted around the white-on-white minimalist penthouse where Toshi throws his parties.

Unfortunately for non-Ponzus, the Flatiron does not allow other dogs inside.

Ponzu’s ubiquity is more than just a cute gimmick. It’s part of a strategic rebranding of his master as a fun-loving nightlife figure, after Toshi’s last such effort backfired.

He’s currently known as the face of Hotel Toshi, a rash of illegal, short-term rentals that plagued residential buildings in Manhattan and Brooklyn, causing otherwise happy renters to flee him faster than a bedbug invasion. “One woman on Mulberry Street got so angry that she posted a picture of the van with my face on it all over Soho,” Toshi said. “In those situations, you’re better off just leaving.”

As the city cracks down on Airbnb-type rentals (illegal in most residential buildings), Toshi is going legit, with two hotels that are actually zoned for short-term overnight stays, and a publicity effort to burnish his reputation.

Not that he’s out of the quickie rental business entirely—his company Smart Apartments LLC has 220 units available in Manhattan and Brooklyn, 17 of them already cited by the mayor’s Office of Special Enforcement, a new department that hands out warnings and fines for illegally converted transient hotels. Luckily for Toshi, the landlords are usually the ones who get fined, not the individuals renting out their apartments to overnight guests.

And so there are no bad vibes evident in Toshi’s Playground, which the owner would like to turn into an artists’ hang. On Monday nights, show your Actor’s Equity card and Toshi will actually pay you $25 to get up and sing a couple songs. He records every performance at the bar. “When one of them gets famous, I’ll have the movie ready,” he said, revealing the sort of forward thinking that made him a pile of money in overnight rentals long before Airbnb was a $1 billion company.

Raised in San Francisco, Toshi came to New York to major in math at Columbia, where he wound up taking a bartending class that changed everything.

“Throwing parties was the best way to meet girls, who I had never talked to before,” he said.

Unfortunately, a renegade bottle and an open window at one of his campus ragers spelled the end of Columbia for him. Typing 100 words a minute landed him a job at Citibank, then a gig as a junior math analyst. He spent the next five years hanging out with traders more than eager to find their new friend a place to throw parties.

And what bashes they were. In the mid-’90s, “Toshi Parties” were just a smidge less legendary than Michael Alig’s, and nearly as outrageous. He employed “Toshi-ettes”: young women who would walk around the parties in their underwear, with stickers of Toshi’s face decorating each breast and butt cheek. He played ’70s funk, bartended shirtless and wore plastic clothing.

An aspiring actor, he also pranced his way into a regular gig on Conan as a Speedo-wearing “gay boy.” He even had a small, more solemn part as a Chinese crime boss in Martin Scorcese’s The Departed, this time playing opposite Jack Nicholson. But these cameos were just a precursor to a better-known role as the owner of New York’s most infamous roving hotel business.

The Puck Building ousted his parties in 2009, and Toshi decided he needed a real job. Thinking about his next move, he went on a trip to Brazil and posted a guest room in his Williamsburg apartment for rent on Craigslist. He was amazed by the eager responses. “I realized that renting out one room would be more profitable than renting my entire apartment,” he said. “And I loved meeting new people.”

Before long, Toshi began leasing multiple units, then turning around and renting them out for one or two night stays. The proceeds enabled him to pay landlords premium rents (20 percent over market, according to Toshi), and keep the profits himself. “It went from one guest room to a few hundred apartments in 48 buildings in less than a year,” he said.

Toshi even put beds on his rooftop and rented those. In the summer of 2009, a Daily News reporter spent a rainy night in a Toshi bed he rented on Airbnb for $100. He was given a tent. He gave it a positive review.

Unfortunately, that Daily News item was a rare piece of good press for Hotel Toshi, whose guests frequently complained on sites like Yelp and TripAdvisor. They claimed that there were problems with bait-and-switch tactics, heat, bedbugs and rude customer service. As one Yelp reviewer put it, “DO NOT stay here!! This was the worst place I have ever stayed in my life—it’s a slum.”

“Stay away,” reviewers warned. But the prices were too good for many to pass up.

Toshi set up an office at 808 Driggs Avenue and made it home base for his yellow “Toshi Truck,” emblazoned with his grinning mug, which transported guests from HQ to their rentals.

Trouble was, almost all of Toshi’s units were in residential properties, so long-term renters would be sharing their building with total strangers who had keys. The constant flow of traffic made it impossible to keep tabs on anyone. Mail started disappearing. Doors were propped open so friends of guests could come and go. People would book several Toshi units to throw a giant party, keeping residents awake all night.

In May 2010, 20 residents complained to Shlomo Karpen, the landlord at 808 Driggs. According to the Brooklyn Paper, he encouraged them to break their leases and move out if they didn’t like sharing with Hotel Toshi.

“You have to understand how much money landlords are making off of these illegal rentals,” said Thomas Cayler, chair of the Illegal Hotel Committee of the West Side Neighborhood Alliance. “Any sort of fines they get from the city, they’ll just write it off as the cost of doing business.”

For his part, the self-styled hotelier claims the “Toshi effect” isn’t his fault. “I had no idea that the landlords were evicting all of their tenants to give me the space,” Toshi said. “Landlords were coming to me and saying we want you to rent the entire building, because I can get a much bigger loan with you as my tenant. And they would take this money out and buy another apartment.”

Things came to a head when Toshi tried to a open a cafe at 808 Driggs in 2011. The longer-term tenants had had enough. In letters to sites including Gothamist and Curbed, they described the horrors of living in a Hotel Toshi building. The cafe never materialized.

Around the same time, the state began battling faux-tels in earnest, clarifying that it was illegal to rent Class A residential units for less than 30 days. The New York City Council simultaneously proposed raising the fines for those caught Airbnb’ing it. Repeat offenders could go from paying $1,000 per illegal occupancy to up to $25,000 under the new bill. (Two weeks ago, the City Council approved the legislation, which Mayor Bloomberg is expected to sign shortly.)

If there was ever a time to go legit, this was it. Toshi said he turned the newly named Smart Apartments over to a hedge fund to handle the day-to-day. The Flatiron Hotel opened in August of 2011: nine stories with 64 compact units, all of them reasonably priced at $350 or lower. Toshi claims that they are at least 90 percent occupied on any given night. Every bathroom has a TV system and is equipped with either a jacuzzi bathtub or a “rainforest shower.”

Toshi leased the space from an unidentified Chinese billionaire after the man’s son decided that he didn’t want a hotel for a graduation present. “The guy spent way too much money on this place to build it, putting TVs in every bathroom,” Toshi laughed. “It was crazy.”

Toshi refused to tell us the name of the mogul he leases from, which isn’t surprising, given various lawsuits surrounding the property. “You know how Chinese billionaires become billionaires?” he asked us. “By keeping a low profile.”

In July, Toshi opened up his second legit location in a commercial space. The East Village Hotel is a self-service, apartment-style vacation rental at 147 First Avenue, on the corner of East Ninth Street. There are no concierges; guests check in via iPad. Rooms are small—280 square feet each—but there is a kitchen, and more importantly, they go for only $289 a night.

Even more uplifting are the positive reviews. If the TripAdvisor comments are to be believed, even “very skeptical” guests have left “pleasantly surprised.” The most common complaints were noise (it is the East Village), and an odd lack of washcloths.

Still, Toshi holds out hope for his dream space. “The kind of hotel I’d really like is a hybrid that doesn’t yet exist between residential and short-term vacation rentals,” he said. “The hotel portion of the Flatiron is for me a very vanilla project.”

Toshi has a long way to go in remaking his image. But what is New York if not the place for reinvention, where abandoned industrial neighborhoods can become Tribeca and Soho? To most people, Toshi is still a suckerfish, hitching a ride from bigger hosts. But if all goes according to plan, he’ll be a big fish soon enough.