Whenever we go home for high school reunions or run into college friends at bars, they always ask the same question: What’s it like working for one of the most prestigious salmon-colored newspapers in New York City, the media capital of the world? And it’s like, they don’t even know that it’s not all that glamorous: half the time when we’re not at movie premieres flirting with Jon Hamm or taking yet another lunch at Michael’s, we’re looking at random videos on the internet, the same as everyone else.

That’s how we stumbled on this trailer for Harris Wittels’s Humblebrag book, based on his addictive Twitter.

As the law of New York Times trend stories clearly states that once a Twitter or Tumblr account becomes popular it must either become a book or a TV show, Mr. Wittels went for broke and did both by hiring several cast members of NBC’s Parks and Recreation to promote the inevitable Urban Outfitters product.

It’s a bummer they didn’t get P&R’s lead Amy Poehler for the video, but she really didn’t want to miss our Rosh Hashanah party. It’s like, Amy, come on, you can come to services with us again next year, but you know how she is. 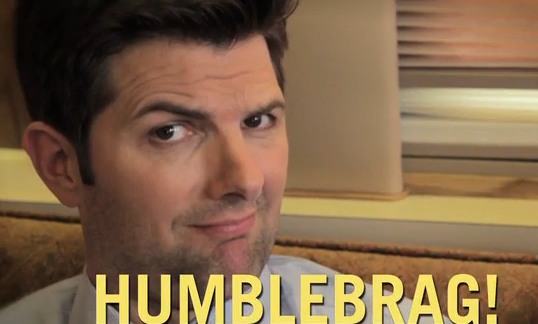