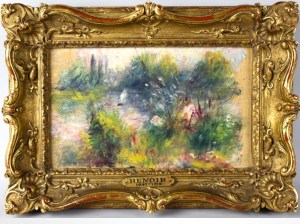 Painting found at flea market believed to be a Renoir. (Courtesy the Potomack Company)

Shopping at a Virginia flea market, a woman bought a box lot of various items for less than $50 that may contain a painting by Pierre-Auguste Renoir, The New York Times reports. The shopper, who is opting to remain anonymous, wasn’t even interested in the small smudgy landscape. She was apparently drawn to the lot of goods by a doll. Nonetheless, a fine-arts specialist at the Potomack Company of Alexandria, Va., is sure it’s a Renoir and the painting, which has been valued between $75,000 and $100,000, is scheduled to be sold on Sept. 29.

Anne Norton Craner, Potomack’s fine arts specialist and a former research associate at the Metropolitan Museum of Art, said she researched the 5.5-by-9-inch river scene and is convinced that Renoir painted it.

“You just see it and you know it’s right,” said Ms. Craner. The owner, who wishes to remain anonymous, brought the painting to Potomack in a large white plastic bag. “She liked the look of the frame, and started tearing off the paper on the back, and her mum told her to stop,” because it might be worth something, Ms. Craner recounted.