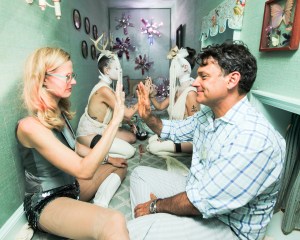 The artist, with Meghan Boody, in the love pod. (Photo: Julian Mackler/BFAnyc.com)

At a party for the artist Randy Polumbo–whose exhibition of fabricated dildos and butt plugs arranged like bouquets inside a vintage airstream trailer opened last week–there were three women in novelty nurse’s uniforms. The invitation carried a few strange details like “mating procedures to be administered and supervised in a one-night-only Polumbo love pod.” A nurse told me to look at a card with a bunch of animal stickers on it and said to quickly, without thinking much about it, pick the first animal that I associate myself with. I picked the puppy. I still feel weird about picking the puppy. She then told me to describe the animal in a word and I said cute. She put the sticker on a name card and wrote down the word “cute.” Then she asked me to pick a color from an ink pad and I picked dark blue. She put my finger in the ink and told me to press my print onto the name card and describe the color. I said “dark,” probably to live down the whole puppy thing, and she wrote down the word on the card.

“Have you touched your genitals lately?” she asked me.

She squeezed out some hand sanitizer, and sent me–this cute, dark…puppy (sigh)–on my way.

Inside, it felt like I was at a swingers party, but instead of a bunch of sexually-charged married people, the room was filled with many of the publicists that I know and work with, which is probably a dream I’ve had at some point anyway, except in the dream I wasn’t wearing a name tag with a puppy on it.

The nurses were walking around the room with clipboards, putting people in pairs and leading them–two at a time–into a secret room above the front door that held the love pod.

I’ll mention here that I consider contrived situations involving sex–like basically any kind of role playing or being put on the spot to describe my fantasies to strangers or whatever–to be a personal kind of awkward hell unmatched by most other varieties of suffering.

So I got in line with my date. The love pod was quite a popular attraction. We talked to one of the nurses about her art history minor at Marymount Manhattan while we waited. By the time we reached the front of the line, it was late in the night and people were drunk–in particular the couple who decided to cut to the front and acted belligerent when they weren’t let in immediately. Our love pod became a foursome.

We climbed a narrow staircase to a room so small you couldn’t stand up in it. Two women, let’s call them sex oracles, (who were mostly topless aside from some sheer lingerie), were kneeling at the front of the room. My date and I sat down in front of them. The drunk people in the back were having a considerable struggle putting their bodies in a kneeling position. The naked-ish sex oracles asked us to mimic their motions and to face each other and touch palms. I was worried that the drunk woman behind me–who was now on her back and sort of just writhing–was going to throw up.

“In three words,” one of the sex oracles said, “describe your fantasy lover.”

“Ocean,” the drunk man said. “Uh, ocean…Shit.” “Ocean, ocean, shit” is not what I would have picked.

I’m not even going to tell you what I said because it’s none of your business.