Eastern Europe’s most famous band outside of Gogol Bordello (and Eugene Hütz met the rest of his crew in the LES, so there you go) Pussy Riot is still dealing with the fallout from the sentencing of three members to two years in prison for “hooliganism.” But while Nadezhda Tolokonnikova, Maria Alyokhina and Yekaterina Samutsevich cool their heels in jail, the other nine members of the punk art collective have worked out a deal to speed along an e-book with Feminist Press.

In just four weeks after the August 17 verdict to convict Pussy Riot, we are publishing the historic words that have captured the world’s attention. PUSSY RIOT! A Punk Prayer for Freedom collects previously unavailable material including letters from prison, closing courtroom statements by the defense attorneys, and poems in addition to the infamous punk prayer and new translations of the powerful courtroom statements. This eBook also includes galvanizing tributes from Yoko Ono, Johanna Fateman, Karen Finley, Justin Vivian Bond, Eileen Myles, and JD Samson. Proceeds from the sale of PUSSY RIOT! A Punk Prayer for Freedom will support the Pussy Riot legal defense team.

The digital book is only $2.99, for sale here. You can definitely afford it … and if you can’t, buy it anyway and print it out to sell copies to your ’zine-friendly friends. No one is saying you can’t be entrepreneurial about this. 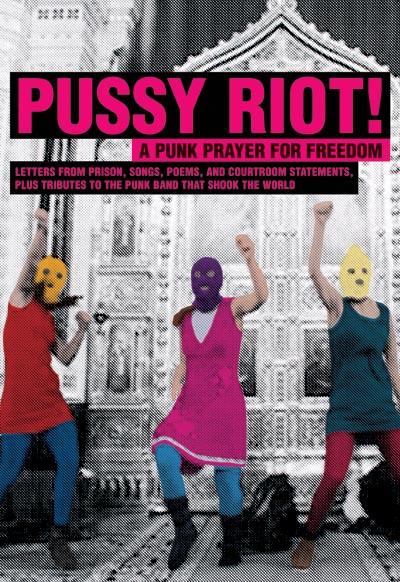