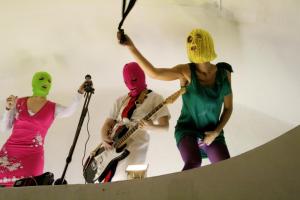 Pussy Riot are the subject of a panel at New York University School of Law, “Pussy Riot and Protest: The Future of Dissent in Putin’s Russia and Beyond—A Conversation with Pussy Riot’s Russian Attorneys,” which will be held on Friday, Sept. 21, from 3 to 4:30 p.m. Three members of the Russian punk band were arrested in March when they gave a short spirited performance at Moscow’s Cathedral of Christ the Savior, then found guilty of “hooliganism motivated by religious hatred” and sentenced to two years in prison.

The panel, which was pulled together very quickly and will feature the Russian attorneys representing Pussy Riot, the names of whom have not yet been confirmed, is being sponsored by the Center for Human Rights and Global Justice and Art Law Society at NYU School of Law and the Department of Performance and the Department of Art and Public Policy at Tisch School of the Arts’ Studies. Also speaking that afternoon is performance artist Karen Finley, who will no doubt be an exciting presence as the artist, known for her graphic depictions of sexuality and abuse, was also one of the NEA Four, the performance artists whose grants by the National Endowment for the Arts were vetoed in 1990 when Senator Jesse Helms condemned the grant on “decency” grounds.

We’ll keep you posted of the names of the attorneys on the panel as they’re confirmed. In the meantime, make sure to RSVP if you plan on attending. We won’t be surprised if this panel causes a stir.

Update, Wednesday, September 19, 3:40 p.m.: The attorneys for Pussy Riot who will be on Friday’s panel have been confirmed. They are Nikolai Polozov, Mark Feygin and Violetta Volkova. Also on the panel will be Alisa Obraztsova, assistant to the Pussy Riot defense team, as well as Petya Verzilov, a political artist and the husband of Pussy Riot’s Nadia Tolokonnikova.

Update, Friday, September 21, 10:30 a.m.: Suzanne Nossel, executive director of Amnesty International USA and a faculty member of NYU School of Law, has been added as a featured participant of the panel.