Congressman Charles Rangel is the latest Democrat to pile on Mitt Romney after Mother Jones released a blockbuster secret video of one of the Republican candidate’s fundraisers in which he characterized President Barack Obama’s supporters as the “forty seven percent of Americans” who “pay no income tax,” suggested he’d have an easier chance of winning the White House if he was Mexican and called peace between Israelis and Palestinians “almost unthinkable,” among other controversial remarks.

“Nothing can be further from the truth than Gov. Romney’s ridiculous remarks that nearly half of American people do not pay federal income taxes, they pay other federal and state taxes,” Mr. Rangel said. “The 47 percent figure cited by the Republican presidential candidate covers only the federal income tax and ignores the fact that people may pay a higher percentage of their income on a wide variety of taxes.”

According to Mr. Rangel, “everyone pays taxes.”

“Everyone pays taxes. Lower income persons pay state and local, property, excise and sales taxes. In fact, when all federal, state, and local taxes are taken into account, the bottom fifth of households pays about 16 percent of their incomes in taxes, on average. The second-poorest fifth pays about 21 percent,” he said.

Mr. Rangel also pointed out these rates are “higher than what the Governor has paid in income taxes.” Indeed, according to the tax returns the his campaign has released, Mr. Romney’s average tax rate for the past two years was about 14.65 percent.

“He has absolutely no moral authority to accuse nearly half of the American people of being irresponsible and freeloaders,” said Mr. Rangel.

The Congressman finished his statement by claiming many of Mr. Romney’s wealthy “friends” also pay lower rates than poorer Americans.

“Many of his millionaire and billionaire friends–approximately 55,000–are paying lower taxes than millions of middle-class Americans. In fact, in 2009, 1,500 millionaires managed to pay no federal income taxes on their millions. Before he judges other people about paying federal income taxes, Gov. Romney should come clean about the tax returns he’s hiding from voters.” 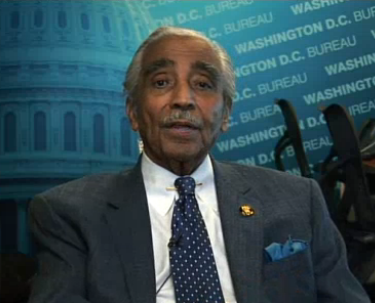