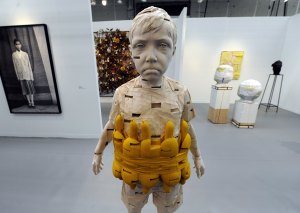 A fine scoop over at Art in America today: Brian Boucher reports that Merchandise Mart Properties, Inc., the Chicago-based owner of a number of prominent buildings and trade fairs, is in talks to sell three of its eight art fairs: the Armory Show, Volta and Platform Los Angeles.

The news comes on the heels of longtime Armory director Paul Morris’s resignation. The fair’s co-founder had been with the organization for 18 years. And last year MMPI lost its president of 10 years, Christopher Kennedy.

More from Art in America:

A Westport, Conn.-based business, Corporate Solutions, has sent e-mails offering “a group of high-end art and design events” that, according to a reliable source, refers to the MMPI-organized fairs. The e-mail, signed by Nick Curci, president, offers a prospectus, though no fairs are named. Curci declined to comment. The e-mail mentions that the fairs attract 90,000 attendees and that sales are expected to increase 10 percent next year to well over $15 million.